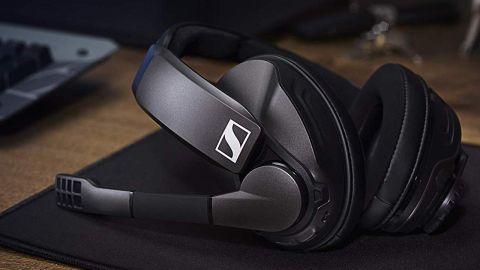 An astoundingly good gaming headset in practically every way. The closest to the best I've tested, only falling short of a perfect score by a single missing feature.

Another week, another Sennheiser gaming headset. A bit after the Very Excellent but Very Expensive GSP 670s graced us with their presence, I was able to check out the GSP 370 model that's a little cheaper and shouts about a supposedly incredible battery life. They retain a classic Sennheiser look and offer a medium-high premium level headset for PS4 and PC users, retailing around the $200 / £170 mark. But are they any good?

The GSP 370 retain an exceptionally 'Sennheiser design' and are very much in keeping with their traditional aesthetic: smooth, matte black finishes covering the solid cups, dual overhead bands, and the flip down mic. As a result, they are immediately identifiable. They're solid in the hand, and the closed-cup over-the-ear design is not too heavy or too light, though they are at the lighter end of the spectrum coming in at 285g. This aids their comfort, which is exceptional, and is enhanced by the close but not squashing cups that are finished with faux suede. This achieves comfort enough to be able to wear them for hours at a time, ensuring you can make the most out of the battery life the GSP 370s offer (more on that later).

Overall, though, it is a premium headset in terms of design and build quality - the robustness of the headset is clear. It'd probably survive a good bump or two whereas some headsets feel like they're held together with hopes and dreams. The GSP 370's design is also one that promotes noise cancelling through its composition: the way the ear cups snugly cuddle your head mean that their very design stops external noise getting in. This is probably something I'd expect on a headset from Sennheiser and one that demands such a price tag, but it's reassuring to experience it being executed so sublimely.

Attached to that quality build are a few on-board controls that make using the headset nice and straightforward. Under the mic on the left cup there's a triumvirate of little features: the LED battery and status indicator; the micro-USB charging; then the on/off switch. Simple stuff and easy to get used to and navigate by feel. On the right cup the large volume dial does all the work - large but seamlessly part of the design. Elsewhere, the USB dongle that the 370s talk to on either PC or PS4 is of a good and decent size - imagine a small-ish USB pen drive. It's nowhere near as small as the one found in the more expensive GSP 670s, but I prefer this as the 670 USB is smart but small to the point of quite fiddly, particularly when interacting with the PS4. But no such issues exist here, as it's an easy-to-work-with USB for the 370s.

The Bluetooth connection provided by said dongle is always strong and has a decent range too, if you should find yourself needing to step away, hide behind the sofa, or do anything else away from your PC or PS4 for a moment. Elsewhere, and on PC, the GSP 370 uses Sennheiser's Gaming Suite software (which is only compatible with Windows 10 currently). This is pretty handy and enables you to customise and alter the settings as you see fit, with a few presets to choose from and other changes available. However, out of the box, the audio is so good and exquisite that I doubt many would have to do any altering in reality.

Starting with the usual suspects in terms of game audio tests, Doom and Wolfenstein's weapon-filled gameplay and Mick Gordon-composed soundtracks were a genuine delight to listen to, seemingly giving me the whole breadth of the headset's 20-20,000Hz frequency range. From tiny machine noises to unadulterated hellspawn screams, and from chainsaw madness to clip-emptying machine gun sprays, the audio was magnificent. Meanwhile, games with detailed and more subtle audio profiles like Assassin's Creed Odyssey can bring to light some headsets' inability to present anything lighter or more subtle. No such trouble here - the GSP 370s gave me an immersive audio experience travelling across ancient Greece. Every wave crashing, or indeed lapping, against ship or shore was just as real as, well, real life; the clashing of weapons on bone and sinew was grisly and detailed, and voices were rich and clear. I'm playing Dying Light co-op with my friend at the moment and the GSP 370s proved the perfect companion here, excelling at every aspect of multiplayer gaming. Or, I should say, nearly every aspect, as the lack of a game audio vs chat audio balancer function is one that feels like an oversight when playing with friends. The overall sound of the combat of the game was portrayed beautifully though, so to speak, and it was always clear how close zombies were to sneaking up on you or which way the Nocturnals were coming from in the night. The GSP 370s really enhanced that game, being able to communicate with supreme clarity - the mic is one of the best I've used in recent months - and, with a broad brush, the mix of the game audio is nicely balanced and can be enjoyed with chat on the top of it (despite there being no dedicated balance function). Turning to Netflix or a movie was an equal joy and with the 370s effectiveness with voices and general audio quality.

On a higher level, the performance of the GSP 370s is defined by the audio quality and the immense battery. The battery life is - somehow - a genuine phenomenon. I've got a note somewhere at home that says I have used the headset for seventy-something hours. And counting. It's incredible, and not just a gimmick or overly exaggerated selling point. Team that with the excellent audio and experience the headset provides and you have a truly winning combination for a gaming headset.

Absolutely yes. If you can save and stretch your budget to a premium model then this is the one to go for. If you oscillate between Sony's console and PC, this is ideal. In fact, the GSP 370 headset is the closest to a perfect-scoring headset I've used and only misses out by one missing feature: the balancer between in-game audio and chat, especially as this is something both official PS4 headsets have and execute extremely well. For the 370's price, you'd probably expect such a feature to exist in some form or another.

However, that aside, the GSP 370 is a headset that's ridiculously easy to recommend. And I'd probably go as far as to say that it gives the much more expensive GSP 670s a serious run for their money; I'd struggle to recommend going for the 670s now as the 370s offer equally excellent audio, and all-round performance as well as that astounding battery life. And for less money, too. If you're happy to pay a bit more for Sennheiser - which is a perfectly sensible thing to do - then you should definitely stretch to these if you can. The immense battery life is worth a few extra currencies for sure, and that Sennheiser quality will make the pricetag generally more palatable too. Basically, this is one of the very best PS4 headsets and very best PC headsets for gaming.

An astoundingly good gaming headset in practically every way. The closest to the best I've tested, only falling short of a perfect score by a single missing feature.