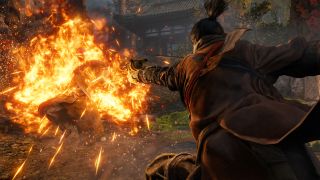 Sekiro: Shadows Die Twice is not the kind of game to sit down with after a long day, beer in hand. You might think this new title from the team at FromSoftware looks like Dark Souls Lite, or Bloodborne for beginners thanks to its more mainstream, action-led focus, but it's really, really not. Although the opening missions will try to convince you that there's an entry level here, a tier for those who haven't spent hours figuring out the intricacies of the Witch of Hemwick or Yhorm the Giant, it's amazing how quickly you reach a difficulty wall so high that you're left scrambling to find a handhold.

For me (and 99.99% of those around me also playing through this preview session), the wall came in the form of a Chained Ogre - a hulking great beast that looks like Rhys Ifans' character in Notting Hill really let himself go, and somehow has a door for a necklace. It's a particularly cuddly beast, but it's less of an embrace than an excuse to grab my supple shinobi form and slamming it rapidly, and repeatedly, into the earth.

Below: Watch our hands-on preview video complete with brand new footage and quite a lot of death.

Until that particular foe, Sekiro does a really good job at tutorialising the various mechanics that make up its core gameplay loop. You play as a master shinobi, simply known as Wolf, who's been bound to a new master, Master Kuro, who just happens to be the Divine Heir, with magical blood lineage that basically everyone wants a drop of. Doesn't bode well for our young master, does it? Everything I've played so far is basically your quest to rescue him from various perils, but of course, the story is just part of what Sekiro is all about.

As a shinobi, you have your trusty sword, but after a fight goes a bit wrong, you're left without your left arm. Thankfully, a wise old Sculptor, preoccupied mostly with carving grotesque Buddha statues, gives you a customisable prosthetic arm. As you work your way through Sekiro's world, you'll find Prosthetic Tools, such as a Shuriken Wheel for spitting out throwing stars to embed in your enemies. The Sculptor can equip them for you, and add another weapon to your arsenal. There are potentially a huge variety of these Tools, ranging from shield breakers to those more suited to taking down swift foes, and you can have three equipped at any one time.

Sekiro: Everything you need to know

It's this that brings something a little different to Sekiro in comparison to Dark Souls or Bloodborne, allowing you to be a bit more flexible with your loadout as the game progresses. It also takes some of the other elements of the classic FromSoftware combat and delivers in a different form. The TL:DR version is basically, if you don't like parrying in Dark Souls, I have bad news for you. A great majority of the combat in Sekiro revolves around executing perfectly timed parries to break the posture of the enemy, allowing you to deal a finishing blow (although, as you'd expect with a FromSoftware title the bigger enemies require more than one of these powerful moves to be downed entirely). What that means is that combat becomes a mix of the dodging and rolling the developer is known for, but also can play out more like a rhythm action game, where the timing of your parries and dodges is crucial to not ending up in a puddle of your own blood. It turns battles into some kind of weird, bloodthirsty dance that will have your hands moving across your controller just as fast as your character needs to parry. That definitely won't appeal to all FromSoftware fans, but it's an interesting blend of mechanics to execute in battle.

Combine that with the stealth features like hiding in long grass, shimmying along ledges, peeking around corners to spy on your enemies, eavesdropping on conversations to get clues about the story and big bad locations, and delivering stealth attack finishing blows - which feel especially satisfying from the air - and the depth increases. It feels like there's much more freedom here than in the more linear FromSoftware titles, thanks to the open areas.

Of course, with a game like Sekiro: Shadows Die Twice you need more than my three-hour hands-on time to figure out the specific intricacies of how it all really works. I'll admit I spent a good hour trying to defeat that Chained Ogre and mouthing profanities at the screen. But boy, is it a pretty game to die in. You're exploring a Japanese realm that's covered in cherry blossoms, creaking pagodas and the stunning natural landscape of bamboo and pretty vines. It all helps to cut through all that blood and brutality too. There's a wonder in the weirdness of it all, the moments where you question if that giant rooster is really an alarm for other patrolling guards? Is that sweet, innocent, ancient-looking, monk actually a devil with a staff? Is that otherworldly priest sitting crossed-legged going to notice if I creep past him? Yes, always yes.

It is slightly disappointing though that the graphical quality doesn't extend to the humans and monsters you interact with. This is, after all, the end of the console generation and we're seeing facial fidelity that could fool your Gran nowadays from the likes of Anthem, God of War and Assassin's Creed Odyssey. I'm aware it's not Sekiro's focus, but the difference between the quality of the world and the people within it can jar.

I've only experienced a fraction of what Sekiro: Shadows Die Twice has to offer, but I'm excited - albeit in a oh god I think I'm going to snap a controller kind of way. There are hints at a greater, potentially time travelling, narrative within the general shinobi and master dialogue, and with even more weird, wonderful and probably terrifyingly powerful things on the horizon, it should be quite the adventure.