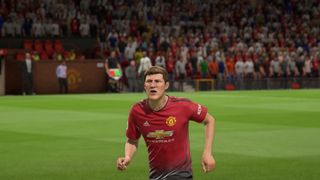 With Aaron Wan-Bissaka and Harry Maguire secured, Manchester United are said to be eyeing another homegrown capture to complete their deadline day dealings – but what does the Sean Longstaff FIFA 19 stats table suggest they’re getting for their reported £45million offer?

In truth… not a lot. The collection of Sean Longstaff FIFA 19 stats is a disaster. It’s chiefly because he started last season with an overall rating of 63, and didn’t receive a single upgrade despite showing abundant real-life promise upon breaking into the Newcastle United first-team.

Yep, his FIFA 19 card is as horrendously off as his in-game player face. Just a reminder that despite the evidence pictured above Longstaff is 21, not 44.

Ah, those ratings. There’s nothing good to report at all, as is often the case with bronze cards. Longstaff's best attribute according to FIFA 19 is short passing, for which he receives 68, following by long shots, with 66. Balance seems reasonable by comparison - also 66 - but there are some horror numbers at the other end of the scale: agility (48), aggression (39), strength (53) and curve (53), to name four.

It’s all grimace-worthy, truth be told. Maybe the most revered management sim in sports can deliver better news?

To a degree, yes. The Sean Longstaff Football Manager 2019 stats round-up is much easier to stomach, with average-to-good attributes in most midfield departments. He earns a 13 technical rating, 14 for passing, 15 for teamwork, and 15 for long shots - suggesting he might pop in the odd one from 30 yards at the Stretford End. Off the ball (14) and stamina (15) ratings are tidy, too.

Indeed, Longstaff only has five FM scores in single figures, proving that he’s not the dud FIFA 19 makes him out to be. Those are strength (9), determination (9), heading (9), long throws (9) and penalty taking (5).

All is not completely lost on the FIFA 19 front, mercifully: Longstaff does at least have a career mode potential rating of 80. And you’d expect that his Ultimate Team rating will be far, far higher than 63 in FIFA 20 - whether at Newcastle United, Manchester United, or Badingamelikenesses Argyle.

FIFA 19 is out now. Wondering what to do with your last few coins before switching to FIFA 20? Then check out our FIFA 19 ratings guide to see the best ten players in the game.