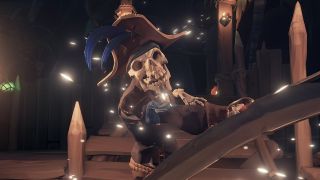 Sea of Thieves has always been fun. From the first reveal in 2015, its mix of sailing, ship-to-ship cannon fights and... puking in a bucket to throw at people, has been some of the best open world co-op gameplay around. But there’s a limit to how many times you can talk about that, and we’ve seen little else in the last three years. That’s why it was so great to spend some time at Rare being told, in depth, about all the other stuff you can do. There are chickens. Not all of them make it.

That ship sailing, pirate core is a great starting point, but talking to various members of Rare, and seeing it all in action, has revealed a much bigger and varied offering than that. It’s full of trading companies to work for, bounties to hunt down, cargo to transport, forts to attack and krakens to find. Much of which has been hinted at, or explained in community videos and updates, but a lack of fanfare has made it easy to miss.

Okay, the co-op sailing, plundering and puking is pretty much about 70% of the game but there is more going on. Not least of which is the ‘end game’ aspiration of becoming a pirate legend. Players that achieve this rank will unlock the best, most profitable and challenging voyages (missions), as well as the most impressive outfits to display their achievements, and a special legendary pirate outpost to call home. However, like a lot of things, it’s the journey that’s that the real prize here, as you travel the world living a cartoon pirate’s dream in search of gold and adventure with a crew of up to three friends.

Not sure Sea of Thieves has enough to keep you playing? This beta datamine may help you decide

The easiest way to start climbing the ranks is working with one of three factions, each a trading company specialising in different kinds of mission. The Gold Hoarders only care about treasure and will sell you maps where X really does mark the spot. The Merchant Alliance are the traders of the world, paying good coin for things to be collected and shipped around the world to specific deadlines. That might be cannonballs and planks plundered from ships, or chickens and snakes captured from various islands, and often combinations of everything. Finally, there’s The Order of Souls, a mystical group that hand out bounties for skeletal ghost captains - fight through their armies and defeat them to claim their skull, and you can turn that in for profit.

Where this all gets interesting is Sea of Thieves essentially utilizes a flat levelling system. Nothing you do, get or earn makes you any better. Guns, clothes and more, no matter how fancy, all basically work the same way, and while you level up in numbers and unlock the option to buy things, the only measure that really counts are Promotions, which you purchase with the money you earn. Each Promotion progression costs more and unlocks harder, more treacherous but higher paying voyages. Here’s the clever bit though: anyone can join any voyage. That flat leveling system means there’s no barrier separating a starting player and experienced pro. So, day one, you could stumble across the best player in the game, join them for a mission and earn a hold full of gold, which you can then use to buy your way to glory of your own. Or you could just work your way up the ranks to reach that level by yourself, with whoever else you come across.

If you’re used to a more rigid progression structure, the idea of being able to play what is effectively endgame content at anytime might sound weird, but the key concept behind Sea of Thieves has always to create stories - even before the game was about pirates. This is a world to do stuff in first and a game second. Missions, outfits and gear are all there to unlock as you play, but that isn’t going to stop you enjoying any of what’s on offer.

It’s that idea of world and story building first and structure second that creates a game full of such chaotically brilliant interplay - full of missions and mechanics that interact and connect in unexpected ways. Say you pick up a Gold Hoarders voyage to get some treasure, as you go you might find a bounty skull in a shipwreck you can turn in later, or see some chickens, pigs, or snakes you can catch and sell. Plus, any cargo you find like gunpowder, wooden planks or bananas are all basically money waiting to happen. The trick is in how you balance everything. Chickens can drown, pigs starve unless fed from your own banana supply, and snakes just bite everything unless calmed with music. Which can make them hard to stuff in a basket but also means you can store them around your treasure to put off any attempted robbers.

Because, of course, just sailing the ocean picking up loot is only half the game. The sea is full of players all doing the same, and guess what? Your treasure’s as good as any other. Every ship is a potential threat, and the tension of seeing another sail on the horizon is palpable. Have they seen you? Will they try and attack? To be honest, usually, yes they will. But if they don’t… does that mean they have a precious cargo they don’t want to risk? And in which case…? You can imagine how this all plays out.

It’s that mix of open structure and the unpredictable threat of other real people that brings everything alive. That’s not say that you can't work together. Those glimpses of ghostly skull clouds hanging in the sky you might have seen, announce the arrival of Skeleton Forts. Usually, these large, fortified islands are empty but when that cloud appears it means they’re alive, sort of, with undead soldiers. Most importantly, the vault deep beneath is full of plunder - more than any one crew can carry. It creates a public event of sorts: ships that see it can approach and, shouting from deck to deck with proximity chat, broker an alliance to storm the outpost. Get through the undead army, and defeat the captain to get the key and there’s treasure for everyone. Now you just have to play nice and go your separate ways without any sudden betrayals.

The enjoyment all this creates is undeniable. But it’s also interesting to see just how smart and forward thinking Rare is being, considering the game was conceived a few years before that 2015 announcement. Sea of Thieves is a lot of fun to play but, more importantly, it’s fun to watch. There’s a whole industry now built around things essentially created to look good for Let’s Play sessions and livestreaming. But most are fired out quickly as Early Access titles in a matter of months, hoping to catch enough attention to fund further development; this has been crafted over years by a respected and skilled developer. Not that you have to share it to enjoy it, it’s a laugh just to run around a deck with friends screaming about sails and anchors. Just don’t name the chickens, okay? No one want to be the one to break the news to the crew that Clucky McCluck-Face drowned.