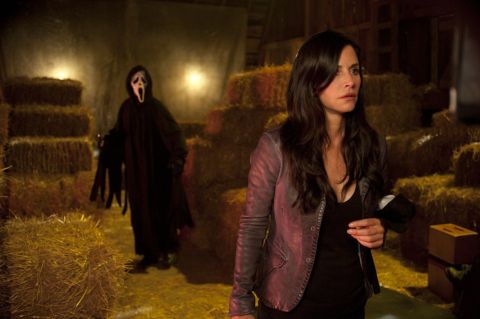 In that time, we’ve had two Hostels, four Final Destinations and seven Saws, not to mention a batch of old school horror remakes, including Craven’s own The Hills Have Eyes and The Last House On The Left.

Ample fodder then for he and creator Kevin Williamson to get their teeth – or should that be blade? – into.

The opening is pure Scream – with multiple murders, cameos from Anna Paquin and Kristen Bell and more double bluffing than a pro-poker tournament.

A new Ghostface killer (voiced again by Roger L. Jackson, the franchise’s true unsung hero) is on the loose, just as original victim Sidney Prescott (Neve Campbell) returns to Woodsboro to plug her new trauma survival tome ‘Out of Darkness’.

But it wouldn’t be Scream without Woodsboro High School, and advancing the plot by more than a decade allows Williamson (back on writing duties after handing Scream 3 to Ehren Kruger) to craft a new generation of knowing teens. Chief amongst them are Sidney’s cousin Jill (Emma Roberts) and her cinephile friend Kirby (Hayden Panettiere).

The introduction of such young newbies means that Scream 4 is a sequel that feels more like a reboot. Little wonder Ghostface is playing by new rules too. “You do a remake to outdo the original,” says Gale, realising our masked maniac has decided to up the ante by filming his murders and uploading them to the web.

He’s not the only one, with two video bloggers (Rory Culkin, Erik Knudsen), who run the school’s Cinema Club, streaming their every move for the internet.

Yet if Scream 4 has gone all tech-savvy it’s debatable whether it follows Gale’s advice and eclipses its predecessors. Rather it’s a case of business as usual.

In fairness, the new cast – particularly an on-form Roberts – help freshen things up, and a decent twist dominates the third act. But aside from the tension-laced scene where two characters watch another get savaged from an opposite window, it’s rarely terrifying.

Let’s face it, next to Freddie and Jason, Ghostface has never been the most charismatic of killers as he flaps around in that silly cape, and it doesn’t change here. “What’s your favourite scary movie?”, he growls, repeatedly. Well, it’s not Scream 4.