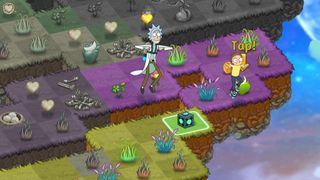 Rick and Morty are all set for Dragonia – they’ll be entering the world of Zynga’s Merge Dragons thanks to a limited-time event. You’ll even be able to merge the grandpa-and-grandson duo with dragons to create Dragon Rick. In your face, Pickle Rick.

Starting today, November 22, Rick and Morty will be part of puzzle game Merge Dragons. The aim of the game is, surprisingly enough, to merge various creatures, plants, and even dragons. You drag-and-drop over and over, often matching three or more on isometric plains to create better items – and out spurts more things to poke around with. You can even tap on certain items to heal the land and let it teem with, you guessed it, plenty more to move and match together – though the special event will introduce some more Rick and Morty-themed gubbins. It’s pretty therapeutic once you get the hang of it.

"We love-a-wubba-dub-dub the idea of Rick and Morty joining us in Dragonia given their packed, intergalactic schedule” said president of publishing at Zynga, Bernard Kim. “As superfans of the show, we‘re honored to have them interact with our players in a way that both fans of the show, and Merge Dragons!, will enjoy. Who doesn’t want to see Dragon Rick evolve?!”

Interestingly enough, a future Rick and Morty season 4 episode will actually feature Morty getting a dragon. The fourth episode – set to air on December 1 – is called “Claw and Hoarder: Special Ricktims Unit” and the synopsis is short, sweet, and Rick and Morty all over: 'Morty gets a dragon in this one broh. It’s a wild ride broh.'

Merge Dragons is available now on iOS via the App Store and also on Google Play.

If the thought of missing out on Black Friday deals has your inner Morty saying "Oh jeez", then make sure you keep an eye on our Black Friday game deals page.