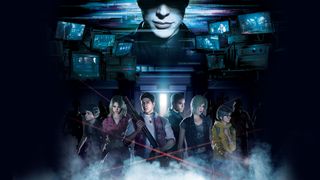 Resident Evil: Resistance, the asymmetric multiplayer spin-off game bundled in with the upcoming Resident Evil 3 Remake, is not a canonical new story in the Resident Evil universe, but rather a "a fun online experience with connections to the RE Universe", according to Capcom.

In a new interview with Official PlayStation Magazine, Resident Evil 3 producer Peter Fabiano clarified that Resistance is "basically set in Raccoon City with scenarios that make it impossible to fit in the actual timeline", even while players can expect to "see familiar enemies and characters like Mastermind."

Fabiano continued to explain that Resistance's connection to Resident Evil 3 is purely thematic, explaining why Capcom decided to bundle the pair together as one package, rather than releasing the two titles separately.

"You’ll remember that the Japanese subtitle for RE3 was Last Escape," Fabiano tells OPM. "Both of these titles have characters that are trying to escape somewhere or something, so thematically it made sense. We also wanted to take up the challenge of building out an online game set in the RE universe."

Oh, and in case you're wondering, no; Capcom didn't build a real life Nemesis to then incorporate his design into Resident Evil 3 through photogrammetry. Instead, Fabiano clarifies that the team "went through a number of different concepts before the director settled on the current Nemesis. Then it was up to the Art Director to bring the vision to life in Z Brush and then have it modeled in Maya (both 3D tools)."

The full Official PlayStation Magazine exclusive feature reveals tons more about Resident Evil 3, including its approach to the original's branching narrative, the return of of Mutant Worms, and more about how Resistance fits into the picture. Pick up your copy on store shelves now, or subscribe to save money and have every new issue delivered directly to your door!

Check out the biggest new games of 2020 and beyond still on the way.