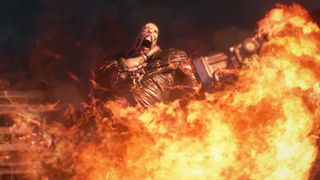 Resident Evil 3 Remake heralds the return of the original's big bad Nemesis, and Capcom has now confirmed he'll be operating not in scripted sequences as before, but on his own terms thanks to an evolved version of Mr. X's AI tech from Resident Evil 2 Remake.

In a new interview with Official PlayStation Magazine, Resident Evil 3 Remake producer Peter Fabiano revealed that – in designing The Umbrella Corps' monstrous predator (who is out to hunt you down across Raccoon City) - the team "took some elements that we learned putting together Resident Evil 2's Tyrant, but Nemesis is his own brand of terror, and a relentless pursuer who can use weapons."

Fabiano also confirmed that Carlos Oliveira, formerly a secondary character in the original Resident Evil 3, will be a playable protagonist for the Remake alongside Jill Valentine, teasing that "Carlos will have his own interesting section to play though", but stopping short of detailing what that might entail.

The full Official PlayStation Magazine exclusive feature reveals tons more about the game, including its approach to the original's branching narrative, the return of of Mutant Worms, and how multiplayer spinoff Resident Evil: Resistance fits into the picture. Pick up your copy on store shelves now, or subscribe to save money and have every new issue delivered directly to your door!