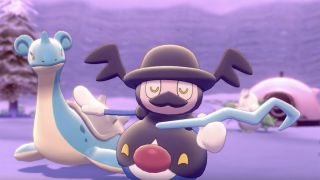 Pokemon Sword and Shield has gotten a new Japanese trailer ahead of its impending release in just a matter of days on November 15, and it appears to tease some new Pokemon and features coming to the Galar region.

In the new trailer two new Gen 8 Pokemon make an official appearance for the first time. One is a snake like Pokemon that looks like it's made out of tile segments, while the other looks like a bowler-hat-wearing Mr. Mime. Names and information for the two new Pokemon have yet to be revealed officially, but several leaks recently surfaced suggesting that the mosaic-like snek is called Runerigus and is the evolution of the Ghost-type Pokemon, Yamask. The Mr. Mime variant is apparently called Mr. Rime, and is said to be the evolution of Galarian Mr. Mime.

While none of this information is confirmed, we're sure to learn more soon given their appearance. The trailer also gives us a recap of some of the new features coming to the upcoming Pokemon adventure. We get to see a short snippet of a trainer participating in a timed track race on a bicycle, as well as get another look at the new Pokemon camp and curry cooking good times ahead.

The Galar region will also enable trainers to make their own League cards. The cards provide detailed information about the trainer and can be traded to others across the region. The card maker lets you choose your trainer's facial expression and select its overall design on the Romtomi device, which is essentially a machine that works in much the same way as the PCs in previous titles.

We also get another chance to see all of the Dynamaxing and Gigantamaxing action in the region, see more of the gym leaders, and glimpses of a train station and the Glimwood Tangle forest area.

Looking to get yourself some Pokemon goodies? Keep in the know with these Black Friday Pokemon deals, or check out our latest Pokemon Sword and Shield preview below.