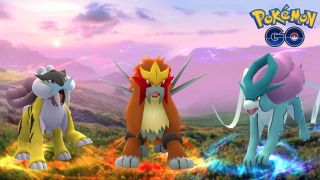 Pokemon Go trainers, are you tired of hunting down the same three Legendary birds across town, hopping from Raid to Raid, with only exhaustion to keep you company? Well, how would you feel if those birds were suddenly dogs? Yup, the Legendary trio from Pokemon Silver and Gold - Raikou, Entei, and Suicune - have arrived in Pokemon Go.

Starting August 31, the Electric-type Raikou will appear at Gyms spread across the Americas region, Fire-type Entei will spawn at Gyms in Europe and Africa, and Water-type Suicune can be battled at Gyms in the Asia-Pacific region.

Unlike the relatively short period of time Niantic originally gave players to catch Articuno, Moltres, Zapdos, and Lugia, you'll have a whole month to catch the Legendary corresponding to your region. On September 30, the dogs will rotate and move to a different region and stay there for another month. Lastly, on October 31, they'll rotate once more and remain up for a month, ensuring everyone has a chance to capture all three Legendaries.

Developer Niantic is also testing the new Exclusive Raid Battle system it debuted in Japan earlier this month. In case you need a refresher, Exclusive Raids appear at a Gym where a player has previously completed a Raid, and hold the most powerful and rare Pokemon of all. The Psychic-type Mewtwo, for example, will be one of the first Pokemon players can capture via the Exclusive Raids.

The announcement of Exclusive Raids did not receive a warm welcome from fans - pretty much the opposite actually, as players said that it felt like a blatant cash grab. For now, only limited players in select regions will get to field test the feature and give feedback. Hopefully when the feature rolls out to everyone it will be something to be celebrated rather than jeered.