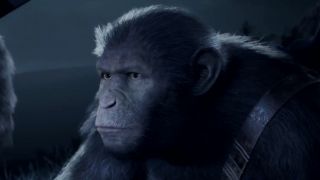 Planet of the Apes: Last Frontier is a Telltale-style narrative adventure, with players taking on the role of two characters - one human, one ape. You can steer each species toward peace or war with the choices you make, defining yourself as an aggressive or diplomatic leader. IGN has a better look at gameplay, and traditional mechanics seem completely absent, with Last Frontier instead directing and changing a scene based on one of two responses.

The game is being developed by FoxNext Games, a division of 20th Century Fox created in January 2017, in association with The Imaginarium, a performance capture studio founded by Andy Serkis. Serkis, you may recall, helped usher in an age of performance capture thanks to his portrayal of Gollum in the Lord of the Rings trilogy, as well as Caesar in the the rebooted vision of Planet of the Apes.

"We are committed to exploring and expanding next-generation storytelling, and Planet of the Apes: Last Frontier represents an exciting marriage of technology and creativity, all set in a rich universe of which I am very proud," Serkis said in the game's announcement press release.

Telltale-style gameplay, Hollywood production values, and involvement from Andy Serkis, all rolled up into a Planet of the Apes-shaped story. I look forward to getting my damn, dirty paws on it when it comes to PS4, Xbox One, and PC this fall.