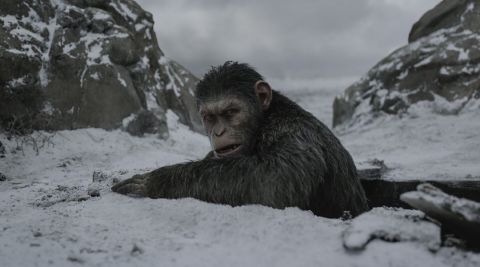 This solid if unspectacular finish to the Apes trilogy features an A-game Andy Serkis and incredible VFX, but its darker excesses threaten to suffocate at times.

Nine films into the extended series, War for the Planet of the Apes finally features a monkey throwing poo. Be warned though, that faeces-flinging is one of very few moments of levity in what’s otherwise an extremely sombre closer to the reboot-trilogy. Beginning with some intense woodland warfare, and never really letting up, it’s a punishingly brutal, but largely satisfying resolution to a plot that was set in motion in 2011’s Rise and escalated in 2014’s Dawn.

War picks up directly after the events of Dawn, with what remains of human and apekind battling for supremacy. Ape leader Caesar oversees a monkey stronghold, which finds itself under siege from human forces marshalled by Woody Harrelson’s callous Colonel.

Noble Caesar is still trying to keep the peace, but two too many ape deaths send him over the edge and into vengeance-seeking mode. He sets off after the Colonel with a few key allies, while the rest of his clan make their way to the promised land across the mountains. En route, Caesar encounters a young mute girl (Amiah Miller), and zoo escapee Bad Ape (Steve Zahn), before becoming embroiled in a species showdown.

Boasting more gravitas than many ‘real’ performers, Andy Serkis’ performance-captured Caesar remains an envelope-pushing marvel who keeps the Apes franchise grounded. Weta Digital has upped the ante again, with possibly the most impressive CG characters ever created. Stunning as the matted fur and creased skin is, it’s the soulfulness in Caesar’s eyes that validates Serkis’ commitment to the dotty-pyjama arts. Wherever the apes are going, it’s not the uncanny valley.

With Caesar struggling to reconcile his vengeful feelings with his desire for peace, the dramatic conflict is largely internalised. As such, it sometimes lacks the depth of predecessor Dawn, which had Caesar contrasted with bad ’un Koba, and found room for nuanced motivations within the humans. Here, it feels more clear cut: the innocent apes against Harrelson’s autocrat and his largely faceless minions.

Even adding a young human girl to the apes’ mix feels symbolic rather than substantial. The focus is very much on the monkey business this time, providing even more VFX to drool over, and there’s a very empathetic turn from Zahn as the timid Bad Ape (another rare source of comic relief). But it means there’s a lot of chatter before the plot really kicks into gear.

When things do get going, they lead to a suitably tense climax that matches anything in the series for scale. It’s fitting that it’s a decent send-off, as the whole film feels like a third act for the trilogy, rather than a standalone entry. Director Matt Reeves (next up for him, The Batman) ladles on the portentousness with many darkly violent moments – close-range executions, strangling, work camps, crucifixions– so much so it almost weighs the film down.

Artfully shot and mournfully scored, there’s no denying the craft that’s been poured into this, even if it’s set to be one of the summer’s more heavy-going blockbusters. Be thankful for Serkis’ powerhouse turn, which is all the more poignant because of the previous films’ investment.

War for the Planet of the Apes

This solid if unspectacular finish to the Apes trilogy features an A-game Andy Serkis and incredible VFX, but its darker excesses threaten to suffocate at times.