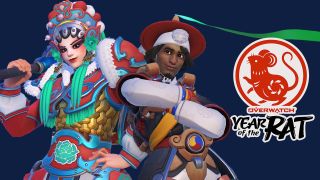 The Overwatch Lunar New Year event kicks off today and it's bringing a handful of new skins, a new game mode, and more. The event, which celebrates the Year of the Rat will run from January 16 to February 6, up through and beyond the January 25 Chinese New Year.

The limited-time event includes a brand new game mode called CTF Bitz, a modified version of Capture the Flag that bunches the flags much closer together. They'll be located where overtime games usually set up, and instead of three captures, you'll need six to win. And you're gonna want to win, as Weekly Challenges are back for the Lunar New Year. Rewards include a bunch of new player icons, sprays, emotes, and three Epic skins. You can win Monk Doomfist in week one, Ancient Bronze Winston in week two, and Paper Cutting Wrecking Ball in week 3.

There are also four new Legendary skins available for Sombra, Moira, Brigette, and Lucio. You can get these skins by opening up loot boxes or by purchasing them outright with Overwatch Coins. As a Moira main, it's nice to see the Irish villain get a Legendary skin, as she's been frequently (and notoriously) snubbed during limited time events in the past. Check out all four Legendary skins below.

Sombra's skin is based on the Chinese performance art called bian lian, where performers wear brightly colored masks that they change with the swipe of a fan or a quick hand movement

Moira's costume seems to reference the one worn by those participating in the Lion Dance, which is performed at big festivals like the Lunar New Year and is said to bring good luck into the next year.

Brigitte's skin is a nod to the ornate and vibrant costumes worn during opera performances, and frankly, her flail looks super cool with this look.

Samul Nori is a percussion genre that originated in Korea whose performers wear costumes, not unlike the one Lucio is wearing here.

Blizzard has celebrated the Lunar New Year with a themed Overwatch event since 2017, but as we previously reported, this year's event was handled differently. First, it was announced just a day ahead of time, as opposed to a few days in advance, and there were no official sneak peeks at exclusive skins (save for the header change on the official Overwatch Twitter account). Also, there were 13 new skins introduced in the 2017 Lunar New Year, six new skins and a brand new map in 2018, and eight new skins in the 2019 celebration. There are only seven new skins dropping this year, but you'll be able to purchase or find all of the Lunar New Year skins from previous years during this year's event.

It makes sense that Blizzard's output is notably diminished this year - as we know that Overwatch 2 got in the way of regular Overwatch updates, and it's probably still doing so.