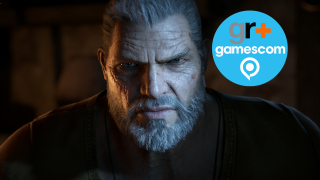 I've long held the very sensible belief that if a Gears of War movie ever gets made, the only person who could acceptably play Marcus Fenix is Dave Bautista. It's obvious. The ex-WWE star turned cinematic heavy has the right build, countenance, and almost exactly the same face. Sometimes even the same dubious facial hair. He is the real-life Marcus. Actual fact. I've known this truth for years.

So imagine my surprise when I saw a chunk of Gears of War 4’s campaign today at Gamescom 2016, and found that Gears of War seems to have realised it too.

Not that The Coalition has remodeled Fenix Snr. to more accurately reflect Big Dave's appearance, or thrown John DiMaggio out of the recording studio. No, what I mean is that in his new role as no-longer-the-lead-character - stepping aside for his more lighthearted son, JD - the original trilogy's main man now uncannily resembles Bautista's marvellous showing as Drax the Destroyer in Guardians of the Galaxy. He's a stubborn, grizzled, humourless old bastard, and although he doesn't seem to know it, he's now absolutely hilarious.

It's a change that really reflects the thoughtful, incisive refresh Gears’ new studio seems to be undertaking with the upcoming game's campaign. It's absolutely true to the character and the series, but by updating the cast with new blood, with a radically different outlook to the original trilogy's Delta Squad, Gears 4 seems to be having a lot of fun recontextualising a great deal of the series’ traditional baggage.

Because Gears 4’s Sera, revisited a couple of decades on from the fall of the Locust, is very different, as are its people. Where Delta were a bunch born into war, forged in more war, and then marinated in a good deal more war, Sera has been largely peaceful since Gears 3, the slightly fascistic rule of its own government notwithstanding.

JD and his friends live outside the fortified cities forcefully ‘recommended’. They've never known real conflict. They're pretty chill until a new Emergence Day arrives - we actually get to see it this time - bringing with it a new enemy in the form of the Swarm. And so their dialogue couldn't be much more different from the grim, maudlin death-grumbles of Marcus, Dom, and Baird. They're upbeat. They're chatty. They're quippy and funny. And then Marcus turns up, and he really isn't any of those things, and it's brilliant. Where the original trilogy was about oppression, and sacrifice, and brotherhood to the end, the bit of Gears 4 shown today feels more like ‘likeable, slightly snarky kid teaches his grumpy old dad to use the Blu-ray player, while killing loads of monsters’.

It's really interesting - and really, really enjoyable - seeing Marcus without his usual squadmate foils. Without those years of understanding, without that battle-hewn sympathy and mutual, doom-laden empathy, he's now every bit the grouchy old curmudgeon with little patience or respect for ‘those bloody kids’. As he snaps at JD’s understandable incredulity at the contrived, strategically designed layout of the Fenix mansion, as he complains about enemy forces in his greenhouse destroying his tomatoes, as his furious insistence that a tactical position will hold is literally ripped to pieces around him (‘Shut up’, he deadpans, before anyone even speaks’), it's easy to imagine that before the new war broke out, he was just sitting on his front porch barking at people to get off his lawn. He's still the same person, but his context has changed, and so he now feels completely different.

None of it can be a coincidence. Gears 4’s devs have already talked about wanting to bring back the fear of the first game with a fresh-faced new group of heroes with a renewed sense of vulnerability. The use of Marcus Fenix like this, every bit the Drax to JD’s Peter Quill, has to be deliberate. A vibrant, concrete means to emphasise that change, the old games’ hardened, capable war hero now slightly softened in importance by being out of place and out of time. He's no less potent a warrior, but with his defining character traits now re-tuned toward comic relief at the same time, The Coalition ensures that he no longer dominates the story as legendary video game heroes of yore are wont to do whenever they reappear.

And you know what? It's just refreshing to see a Gears campaign that isn't relentlessly grim. When the original trilogy was at its best, it was blending brutal, bloody combat with acerbic humanity and gallows wit. It was never Uncharted, and it was never meant to be, but as video game analogues to Predator go, Gears was really strong. As things went on, we lost a lot of that, the contrived tragedy of Dom's descent taking up far too much screen-time, and the only levity coming via Cole's increasingly forced antics. But Gears 4 feels different. It feels fresher, and zestier, and airier, and entirely more natural. It's funny, and it's human, but that doesn't mean that it takes the drama of its threat any less seriously. It just means that when the shit really hits the fan, and things do get scary, it's probably all going to matter a whole lot more.