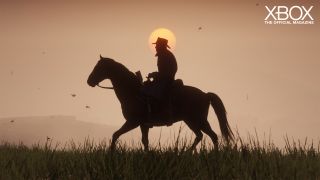 I've lost the run of myself. Again. Every time Rockstar releases a new open-world epic, I promise I won't let it devour my life. That never really seems to work out, though. So here I am, 118 hours into my second playthrough of Red Dead Redemption 2, bleary-eyed and unsure of how I got into this situation. All I know is this: it's 1:38am, I feel dizzy, introspective and kinda sad, and I'm about to 100% one of the best video games ever made.

As I type this, I'm looking at my profile on Rockstar Social Club. The numbers are... ahem, 'sobering'. Four days, 22 hours and 23 minutes. That's how long it takes me to reach 100% completion in Red Dead Redemption 2. If you'll indulge me a second while I quickly do some Count Von Count maths, those swollen figures roughly equate to three working weeks, assuming you clock in a 40-hour week. Yeeeeah, those numbers are pretty unhealthy.

Getting to 100% completion has broken me. I can't remember the exact day I start my second playthrough of Arthur's Morgan's Wild West masterpiece, but I do know the weather was a hell of a lot less hypothermia-courting than it is now. Over the course of at least three months, playing Red Dead Redemption 2 is basically my full-time job.

Seeing as I'm now back in a full-time job – cheers for that, OXM – I'm glad I wrap up my time with Arthur when I do. Looking back, my routine while trying to 100% the outlaw's sandbox is insane. I get up, immediately switch on my Xbox One X, bring up six or seven tips-related windows on my tablet – cheers for that, GamesRadar – then get knuckled down to the business of making that progression rate slowly creep up. Breakfast be damned! There are legendary cougars to hunt, gang hideouts to clear, and about another two dozen activities that all have to be ticked off.

Let's crunch some wrong-headed numbers again, shall we? Here's a fairly exhaustive list of every activity you have to do to reach 100% completion in Rockstar's cowboy epic. Brace yourselves. So... you have to finish all 107 main story missions – to give you context, the hardly short GTA 5 has 69. But that's only the beginning of the life-swallowing story. There are 20 dinosaur bones to unearth; 13 legendary animals to slay; 13 equally legendary fish to bag; ten rock carvings to find; 20 dreamcatchers to uncover; a minimum of 50 kinds of animal to identify; 48 different guns to find then fire; ten different species of horse to break in; 20 types of plant to pick; six gang lairs to shoot up; all the cigarette cards to collect. There are a bunch more mandatory activities to blitz through, but I'm getting light-headed here, so let's move on.

Actually, let's not. I've not mentioned the biggie yet. The most suspension-ruining speed bump on the road to 100% completion involves Arthur's challenges. There are ten sets of challenges, spanning gambling, hunting, herb-picking and gunslinging. All of these have ten different ranks to unlock, and some of the super specific parameters you have to meet are maddening. Just ticking them off is a game in itself.

I'm not even exaggerating. I must spend a minimum of 30 hours laser-focused on nothing but these challenges. I've wasted more time than I'm comfortable admitting looking for an opossum, then shooting it at the exact moment the poor critter starts to play dead – the Master Hunter challenge actually asks for this insanely specific death. There's a hoity-toity saloon I spend about three hours in just joylessly playing blackjack. Why? Because I have to win three hands of the damn card game with three hits or more; an obnoxiously tough task that requires far more luck than skill. Screw you, Gambler rank eight.

Then there are the fetch-quests. Lord, the goddamn fetch-quests. Let's tackle 'Duchesses And other Animals' first. There's a foppish fellow by the name of Algernon Wasp in northern Saint Denis who has a ravenous craving for the finer things in life. To satiate this aristocrat's appetite, you must collect a truly horrible amount of exotic items. Five snowy egret plumes! Ten heron plumes! Ten moccasin flower orchids! 25 gator eggs! Seven cigar orchids! 30 spoonbill plumes! Ten sparrow's egg orchids! The damn egret plumes alone take me over two hours to collect. Turns out, that very specific bird only spawns at an even more specific part of the bayou surrounding Saint Denis at a predictably very specific time of day. This collectathon questline probably takes me the best part of ten hours to tick off. Algernon, I hate you.

Even worse? The hunting quests. There's some old dear living out of an opulent cabin in the woods near Strawberry who loves stuffing critters. In assisting this woman in her taxidermy quest, you're signing on to lose your freakin' mind. I've never once squinted at my TV as intently as I do during this laborious set of pelt- hunting tasks. Not only is spotting and shooting tiny squirrels and chipmunks before they scurry into the underbrush a pain in itself, but the blasted fogey demands perfect carcasses just to make your life extra miserable.

This means shooting your prey with just the right type of gun and ammo, then hoping you get a three-star rating. The birds ruin me. The precise avian menaces you're tasked with blasting are usually obscenely teeny. The only hope you have of spotting a robin, sparrow or songbird is to look up at the sky, enter Dead Eye mode, and cross all your digits that tiny spec in the clouds is the three-star bird you're looking for. I'm currently trying to repress the memory of spending 45 minutes doing circuits around a small island waiting for a perfect blue jay to spawn. I'm definitely not going to regret that on my deathbed, no sir.

I've moaned about 100 per centing Red Dead Redemption 2 a lot, haven't I? It's one of the most draining undertakings I've ever endured. And yet, I absolutely don't regret taking this mammoth Wild West task on. The second the achievement pops to signify the deed is done is as close to a perfect moment as I've ever had with an Xbox One. The slightly spoilery last task involves visiting a grave just as the sun is setting. It's a wonderful, moment of mourning, of the culmination of a long road travelled. It's the ultimate cowboy catharsis.