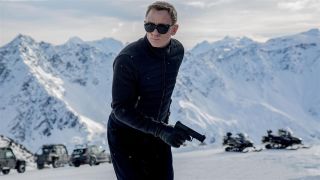 "There's just no time to die," croons Billie Eilish on the Bond 25 theme. With a moody title song, Daniel Craig's swansong, No Time to Die, is shaping up to be a fitting farewell to the second longest-serving 007.

Unlike Bond, though, we haven't got a bottle of Bollinger and a roaring Aston Martin to help pass the time before the movie finally arrives in cinemas this April. Instead, we've rounded up everything you need to know about No Time to Die, including the staggered release dates for the US and UK, some shiny new posters, and all the latest rumours about Daniel Craig's final mission. Now, pay attention... this is for your eyes only.

No Time to Die release date

Oh, what could have been in 2019 – Wonder Woman 1984, the Sonic movie, and No Time to Die were all pushed back from their original release slots.

The No Time to Die release date was October 25, 2019 (November 8 in the US) but was understandably pushed back after the news broke than Danny Boyle – the original director on No Time to Die – left the project.

No Time to Die trailers

The first No Time to Die trailer emerged in December. And Daniel Craig’s Bond is washed-up – again!

Following immediately on from the events of Spectre, the trailer sees 007 screeching through the streets with Lea Seydoux’s Madeline Swann in tow. The name of the game here appears to be betrayal, specifically Madeline’s possible backstab, judging by Bond’s reaction: “We all have our secrets,” he spits, “we just didn’t get to yours yet.”

Appearing to be off-grid, 007 is recruited by Jeffrey Wright’s Felix Leiter (returning for the first time since Quantum of Solace and becoming the first actor to ever play the character in three Bond movies) for a job.

Bond also comes face-to-face with the latest 00-agent off the MI6 conveyor belt, played by Lashana Lynch. She promises to put a bullet in his knee. At least, the one that works. Ouch. No Time to Die, plenty of time to gently prod the ever-weary Bond, it seems.

The crux of the trailer, though, concerns Swann’s secret. A mask in the mail signifies that some major beans are about to be spilled, and it probably has something to do with Rami Malek’s unnamed villain. He’s seen wearing the mask in a later scene. Adding to the villain stakes, we also get a surprise Blofeld return. Thankfully, he’s all locked up… for now.

If you want a super-special breakdown of the No Time to Die trailer, be sure to check out our feature with director Cary Fukunaga.

Bond even managed to sneak his way into the big game with a No Time to Die Super Bowl 2020 trailer . There are a handful of new scenes to take in, including Craig's 007 piloting a wafer-thin spy plane alongside Lashana Lynch's character and Bond gunning down some unseen baddies on a city street.

No Time to Die theme

Billie Eilish performs the dramatic No Time to Die theme, which was released in February 2020. “It feels crazy to be a part of this in every way," she said of singing the title song. "To be able to score the theme song to a film that is part of such a legendary series is a huge honour. James Bond is the coolest film franchise ever to exist. I’m still in shock.”

The turnaround for "No Time to Die" didn’t quite mirror the slower pace of the piece: “We got a piece of the script, the first scene, and then we wrote the song immediately… we wrote it in three days. We wrote it in Texas, and we recorded it in a bunk on the bus in a basement in the dark.”

Eilish also said the No Time to Die theme “went through a lot of different versions” but that “it was a really good collaborative experience [with No Time to Die composer Hans Zimmer].”

No Time to Die director

Cary Fukunaga jumped on board as the No Time to Die director in September 2018. This followed the news that Danny Boyle had left the project, which was then called Bond 25, due to creative differences (via The Guardian).

Fukunaga may not be a household name – but there’s a good chance you’ve seen his most acclaimed work. He’s best known for helming the entirety of True Detective season one. If you remember the extended tracking shot during episode four, you’ll know why fans are excited for him to take charge of a Bond film.

The director has also helmed Beasts of No Nation, Jane Eyre, and Maniac. However, he also left True Detective and the original It because of, you guessed it, creative differences. Thankfully, it was all smooth sailing this time around.

No Time to Die cast

Daniel Craig is back as Bond for the fifth time, following his starring roles in Casino Royale, Quantum of Solace, Skyfall, and Spectre.

The actor also confirmed this will be his last film as 007 film. "I just want to go out on a high note, and I can't wait,” he told Colbert. One assumes by "high note" he doesn't mean in a hospital bed, as shooting had to shut down earlier this year thanks to an ankle injury picked up on-set by Craig.

There are also plenty of returnees: Regular 007 sidekicks Ralph Fiennes (M), Naomie Harris (Moneypenny), Ben Whishaw (Q), Rory Kinnear (Tanner) and Jeffrey Wright (Felix Leiter) are all back in the saddle for No Time to Die. And intriguingly, so is Léa Seydoux, whose Madeleine Swann was last seen with Bond at the end of Spectre – a rare return for a Bond movie love interest.

According to a widely publicised report by The Mail, Bond 25 will begin with Craig's Bond having retired to Jamaica and Lynch's character having taken over as 007.

One of those coming back, Naomie Harris, recently spoke to Total Film about her character's development in No Time to Die. According to the Moneypenny actress, she's "matured somewhat."

There are also a handful of newcomers joining No Time to Die. Those fresh faces entering 007’s orbit includes Rami Malek (Mr. Robot), Ana de Armas (Blade Runner 2049), David Dencik (The Girl with the Dragon Tattoo), Billy Magnussen (Velvet Buzzsaw) and French newcomer Dali Benssalah – though who they're actually playing is anyone's guess at this stage. No Time to Die has secrets upon secrets upon secrets.

No Time to Die villain

Beyond 007, the big No Time to Die cast news is that Bohemian Rhapsody Oscar-winner and Mr Robot star Rami Malek is playing an unnamed villain. How do we know he's a villain? He even said at the Bond 25 launch in April that: “I promise you all I will be making sure Mr Bond does not have an easy ride of it in this, his 25th outing.” You can almost hear the maniacal laughter.

If you want a sneak peek at the villain in actiom, be sure to check out this exclusive No Time to Die image.

Director Cary Fukunaga has opened up ever-so-slightly about Malek's character motivations. He told sister publication Total Film: "Every tyrant and villain is trying to play God in some way, right? They see themselves higher than everyone else. They’re pulling the strings. There’s an entitlement there, and a playfulness. So yeah, I guess all the great villains play God."

No Time to Die plot

We suspect you’d have to sign the Official Secrets Act to get anywhere near the No Time to Die plot – and even then, you'd be locked in a cell until the movie's release, just to make sure you didn't blab. Even so, there are a few tidbits of the No Time to Die story in general circulation, as long-time 007 producer Barbara Broccoli confirmed at the movie’s launch in Jamaica that: “Bond is not on active service when we start the film, he is actually enjoying himself in Jamaica. So he starts his journey [there].”

It seems likely that Bond is enjoying some extended R&R with Ms. Swann when the movie begins – fingers crossed things don't go as badly as they did for Jason Bourne’s vacation at the start of The Bourne Supremacy.

Unfortunately, the official No Time to Die synopsis doesn’t bode well for any romantic getaways. “His peace is short-lived when his old friend Felix Leiter from the CIA turns up asking for help," it reads. "The mission to rescue a kidnapped scientist turns out to be far more treacherous than expected, leading Bond onto the trail of a mysterious villain armed with dangerous new technology.”

There's even a brief look at the Jamaica scenes out in the wild, thanks to the 007 Twitter account. Leiter is looking the little worse for wear in scenes that harken back to 007's original movie outing, Dr. No, which was also set in Jamaica.

Of course, it wouldn't be a Bond flick without a trip back to London. Jamaica is the starting point, but it seems like Daniel Craig's secret agent will be going back to his roots. A recent behind-the-scenes post reveals that a No Time to Die location will, unsurprisingly, be London. Bond even has one of his trademark cars in tow: the Aston Martin V8, last seen in Timothy Dalton's The Living Daylights.

Another shooting location could also clue us in on the plot. Bond is heading back to Scotland for the first time since Skyfall, if recent filming plans (as revealed by British newspaper The Daily Mail) ring true. But don't expect a Skyfall Lodge return; that was actually filmed in Surrey, England. Sorry to disappoint.

007 star Daniel Craig, director Cary Fukunaga and the #Bond25 crew were out in the sunshine today shooting across a number of London locations, including Whitehall, where Daniel filmed a scene with a classic @astonmartin V8, first seen in a Bond film in THE LIVING DAYLIGHTS. pic.twitter.com/rhs13nNeyWJune 30, 2019

Meanwhile, the Daily Mail has also reported that the plot will involve genetic warfare – and that Pheobe Waller-Bridge has come on board (at Daniel Craig’s insistence) to make the complicated science understandable to cinema audiences.

“The movie's premise is genetic warfare, which is fascinating – but you gotta boil it down and make it accessible,” said an unknown source from production. “That's why Phoebe was hired. She has somehow made sense of it.

“There aren't many people in the world bright enough to bring some humour to the topic of genetics and the Human Genome Project.”

Those looking for No Time to Die to wrap up Craig's stint can also rest easy. Moneypenny actor Naomie Harris told GQ, "It’s a tie-up of Skyfall and Spectre. But with massive, massive surprises that even had me like, ‘Oh, wow!’ So I think we’re going to really shock people.”

Quite the global tour, right? Daniel Craig (and company) can now rest easy after their travels to Jamaica and beyond. As per Instagram, 007 himself, wearing a tux, naturally, celebrates filming being wrapped alongside director Cary Fukanaga.

No Time to Die poster

To mark James Bond Day on October 5, the official 007 Twitter account shook the internet with the first release of the No Time to Die poster.

Much like Craig himself, it's punchy and to the point, while still oozing enough style to adorn a bedroom wall (or twelve). Check it out below.

If that stirred you up, there are also even more character posters. Bond looks very workmanlike. Maybe he's doing a spot of DIY on the weekend?