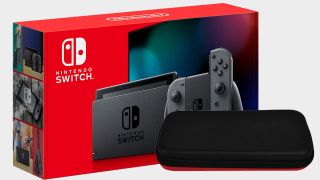 Nintendo will soon start production on a new Nintendo Switch model which will release this summer, according to a report from DigiTimes. As spotted by Takashi Mochizuki, a Wall Street Journal reporter who covered two alleged Switch models in early 2019, the report claims that production will begin around the end of March, with a full release tentatively scheduled for the middle of the year.

This is all wildly unconfirmed and more than a bit shaky. While DigiTimes has been bang-on with some Switch details in the past, it's also been wrong on several points. That being said, there is a notable pattern, and the idea itself isn't too far-fetched.

Realistically, there are three outcomes here. One, this is all just a bunch of smoke and nothing will come of it. Two, this is mostly smoke and this alleged Switch revision is nothing more than a slight iteration, not unlike the second model which improved the system's battery life. Or three - and this is the real hail mary - the Switch model DigiTimes describes is in fact the 'Pro' version of the console which Mochizuki originally reported in 2019.

Mochizuki's report discussed two Switch models: a slimmed-down one aimed at casual and handheld gamers, and a beefier one targeting hardcore gamers hungry for high-end performance. We now know that the former was the Nintendo Switch Lite, a handheld-only version of the console. As such, it's possible that the updated model DigiTimes is now reporting is in fact the rumored high-end model which was never confirmed, let alone seen.

Option three is an exciting theory, but a flawed one. First of all, this is not a lot of evidence to go on. Secondly, the position of a would-be Switch Pro in both the console market and Nintendo's stable is, well, awkward. Many have suggested that a Switch Pro could be Nintendo's answer to PS5 and Xbox Series X, but even if Switch did get a beefier Pro version, it wouldn't come close to next-gen performance. Sheer horsepower has never been Nintendo's focus, and that's not going to change this generation.

The Switch and Switch Lite are weaker than a base PS4, so if we do ever see a Pro version of the system, it would probably be weaker than even a PS4 Pro. If it were any more powerful, Switch developers and players could become divided by soft exclusives, with some games only running well on the Pro version. So at best, a Switch Pro might offer smoother frame rates and shorter load times for existing Switch games, perhaps with some other minor bells and whistles thrown in. Similarly, where the Switch Lite sacrificed docked support in exchange for a slimmer profile and lower price, a would-be Switch Pro could give up handheld functionality in order to pack in more power, but that's just speculation. All in all, I don't doubt that we'll see at least one more update to the Switch, but how substantial that update is - and whether it arrives this summer - remains to be seen.

Speaking of hardware rumors: a new batch of DualShock 5 images have leaked along with another look at the PS5 dev kit.