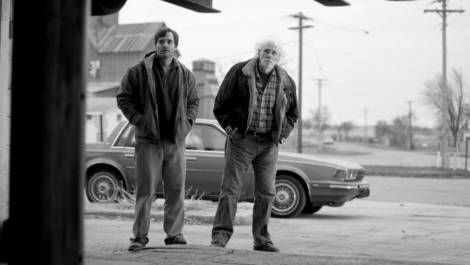 Walk-on role in Django Unchained aside, it’s been way too long since we last saw Bruce Dern in anything of substance, so it’s good to report that the veteran actor is back in career-best form in Alexander Payne’s latest bittersweet mix of comedy and tragedy.

He plays Woody Grant, a near-senile alcoholic living in Billings, Montana, who’s convinced by a scam mail-shot that there’s $1m waiting for him in Lincoln, Nebraska. He’s not allowed to drive and his exasperated wife (June Squibb) isn’t going to take him. So his son David (Will Forte) is talked into driving the old boy across two states to pick up the non-existent loot.

But en route to Lincoln the pair detour to Woody’s home town to stay a couple of nights with his extended family, and it’s here that the barbed comedy really kicks in. Once Woody lets slip about the supposed million bucks the eyes of his kin, and of the townsfolk, light up with greed.

Nebraska is Payne’s birthplace, and he knows these desolate flatlands and crumbling little dead-end burgs from the inside. So underlying the social satire is a sense of resigned melancholia. Towns like these, we can guess, never had much going for them – and in today’s dire economic conditions, they’ve got even less.

Shooting in widescreen black and white, Payne works fresh variations on his favourite format, the road movie (see About Schmidt , Sideways ). His sense of place is as acute as ever and the casting is spot-on down to the smallest bit-part. As Woody’s sardonic wife, Squibb steals several scenes, and there’s another welcome returnee in the shape of Stacy Keach as Woody’s ex-partner with his eye on the loot.

But above all, Nebraska belongs to Dern, inhabiting his role with total conviction. Shuffling, shambling, his white hair fluffed out like stale candy-floss, he’s a picture of dazed helplessness. But then every so often, a glimpse of that cunning sidelong glance we remember from the Dern of old makes us wonder – is Woody quite as doolally as he makes out?

A pitch-perfect performance from Dern graces Alexander Payne’s latest roadmovie – another bittersweet meditation on the sad, comic futility of life.