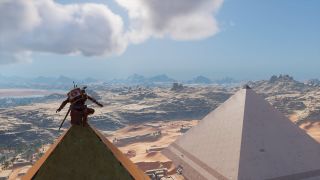 You know, if there’s one thing you can rely on the internet for these days, it’s that people will always find some sort of way to lose their minds and declare utter outrage at something that, in reality, doesn’t affect them. The latest example of this is the upcoming Discovery Tour mode in Assassin’s Creed Origins, which will be added free for anyone who owns the game on February 20th, and made available as a standalone game for $20.

Ubisoft’s promoting it as an educational mode where you can explore the game’s vast landscapes at your own pace while learning things about the locations and artefacts, but some people are focusing more on the fact that it essentially removes the game’s challenge altogether, and they’re not too pleased about what they feel amounts to dumbing down for the benefit of ‘non-gamers’.

Not only is the Discovery Tour mode actually a great idea, I want to see more of it in other games. Open world games can be overwhelming – fittingly, Ubisoft titles are the worst culprits for this – and I’d love the opportunity to just wander around and explore for a while without worrying about getting into trouble. Grand Theft Auto 4 was the perfect example of this. A lot was made about how it was going to be a huge, bustling, living city but when you started the game it quickly became clear that large swathes of the world were inaccessible.

A bunch of bridges were blocked off (due to fears of a terrorist attack, apparently) and if you tried to reach the areas past them you’d get an instant six-star wanted rating. You had to play through the game for ages and finish a load of missions before you were free to roam, and even then you had to behave yourself if you didn’t want the police on your back again.

Removing the difficulty gives you a chance to look around you. The first Watch Dogs created a magnificent recreation of Chicago, but its map was swarming with icons for mindless side missions designed to artificially enhance the game’s length. Players spent most of their time with that game staring at GPS arrows instead of exploring the incredibly detailed city a bunch of artists painstakingly put together. See also L.A. Noire and Mafia 2 and 3. Some of these cities and landscapes are modern works of art, and there should be absolutely nothing wrong with people wanting to buy a game just to wander around and do some virtual sightseeing. Even though Nando’s is a chicken restaurant, some people prefer to order the steak roll.

The beauty about gaming is that it’s a non-linear experience. Unlike a film or a book, it’s different to every person every time they play. With that in mind, why should anyone be annoyed at a ‘no difficulty’ mode that removes enemies? You may be the sort who loves sweating blood as you die for the umpteenth time in Dark Souls 3, but maybe someone wants to just explore that game’s world and try to get their head round its lore? It won’t affect the difficulty in your game, and you’ll still get trophies.

We need to get over the mindset that there’s only one way to play a game and anyone who wants to do it otherwise is wrong. If gaming is going to continue to grow it has to appeal to people of all levels of ability – including none – and we should be celebrating developers who offer that choice, not calling for their heads.

Chris Scullion is a Celtic supporter. As a Scottish football fan, he’s used to not spending fortunes on superstars. He wants the FIFA 17 Henrik Larsson legend player, but since Henrik’s 495,000 coins, he might have to settle for Danny Ings.
See comments