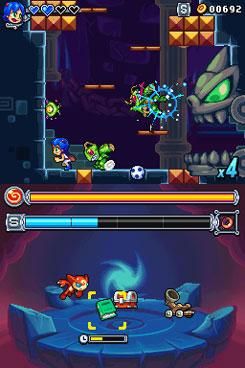 It’s easy to get a negative first impression of Monster Tale when you hear it described. A cartoony, 2D adventure game on the DS? There’s an abundance of those. But Monster Tale contains such a high degree of polish and enough ingenuity that you’d really be missing out if you left it at that.

Your basic setup for the game is this: Ellie, the precocious female lead, goes for a walk in the forest late at night, where she finds a bracelet. Upon putting on the bracelet, she’s transported to a fantastical world filled with Monsters. She soon comes upon a large egg that hatches, and out comes Chomp, her adorable but ferocious ally. Armed with her beam-firing bracelet and Chomp’s fantastic abilities, Ellie has to find a way home. Unfortunately, there are other humans in Monster Land who instead of befriending the monsters have enslaved them to do their bidding - and they want Ellie’s Bracelet for themselves. It’s a simple setup that serves to move the game along, but you’re not really going to be thrown any surprises as far as plot goes. But the gameplay is where this title really shines.

Above: You’re not the only kid with a monster for a pal

Essentially, you have control over two characters. Ellie starts with only an energy beam attack, but will gradually gather ability spheres to give her all sorts of new tricks like wall jumps, melee attacks, ground pounds, and a variety of powerful beam attacks that serve to make her a formidable fighter before too long into the game. Chomp, meanwhile, flits about more or less of his own accord, smacking enemies whenever necessary. In addition, he’ll learn special moves, which you can command him to perform by pressing one of the shoulder buttons, such as Torpedo, a full-body tackle that deals some good damage.

As chomp levels up (either by using items or defeating enemies), he’ll learn and master new techniques, including ranged attacks and non-attack moves, such as ones that allow Ellie to jump higher. He’ll also unlock new Evo forms, which change his attributes and the abilities he learns. Not every move you learn can be used in any Evo form right away - but if you use it enough, you’ll master it, and then you can use it across every form. Each attack and Evo form has elemental attributes (water, earth, fire) that affect how much damage it does to enemies of opposing elements in a simple paper-rock-scissors style configuration. You can also learn and master new Traits, which improve Chomp’s attributes. Getting intimidated yet? There’s more.

Above: This all makes sense when you play the game, we swear

As the game progresses, Chomp’s age level increases from child, to teenager, to adult, etc. Each new age level unlocks a new tree of Evo forms to choose from. You’re not required to take the current age level’s Evo forms, though, so if you want to master that handy ranged attack from a teenager form so you can use it later, you’re free to do so. Ultimately, if you spend the time thinking about it and grinding, you could kill quite a few hours just creating the optimal Chomp for yourself. There’s also the option to buy powerups for Ellie and new toys for Chomp, which not only give him experience, but up his attributes and have on-screen effects, such as sending a toy car racing around the screen, dealing damage to whatever it hits. And if you and Chomp can juggle an enemy mid-air after they’ve been killed, you’ll be rewarded with some extra gold for your troubles.

There’s an amount of strategic depth here that’s insane for a 2D adventure game, but the experience is paced in such a way that the learning curve is nice and gradual, and you never really feel lost. There’s even a Metroid-like mechanic wherein Ellie gets new abilities and you have to backtrack to previous areas that you can now access new venues from. See a ledge too high to get to? Come back after you get the wall jump ability. The handy map lets you see which areas aren’t fully explored yet, and also shows your next checkpoint. While we enjoyed uncovering previously inaccessible areas, the backtracking did get a bit much from time to time.

Monster Tale, on top of its meaty gameplay, is aesthetically pleasing, too. It has a cutesy vibe to it, but the style fits the theme as the characters are either cartoon monsters or children. The animations are nice and smooth, and the sound effects are vivid enough that when you smack a club-wielding alligator monster in the face, you know it. It’s a simple, cartoony design that pulls together the fantasy world the developers have created, and it works really well. All in all, this is not a game to be missed if you’re not ready to abandon your well-worn DS for the shiny new 3D version.