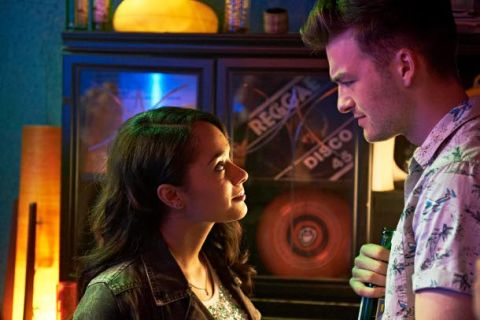 THE ONE WHERE A killer, suited, six foot rabbit stalks the corridors at the most insane house party Finn has been to in his shitty little life.

VERDICT Misfits may be as well written, well acted and well made as it’s ever been, but the problem with this latest series is that it’s frequently felt like a show which has run out of ideas. Not so with episode six, because for the first time in series four Misfits feels fresh again.

The powers are great for one – a junkie whose hallucinations come to life and an insecure boyfriend who can make the truth plain for all to see are terrific concepts, with oodles of dramatic potential. It may be the rabbit that steals the headlines (the creepy, horror movie headlines), but it’s the numbers that are most important. They cause the characters to think about each other in different ways and lead us to wonder how the heck Rudy convinced 99 different women to sleep with him. Seriously, where does he find them all?

Despite being the strongest advocate for his single digit at the beginning, Finn is the only one who manages to bump up his figure by the end of the episode, while Rudy – the one actively seeking a centenary shag during the first act – finds... something else. On paper it’s a complete character reversal, but in context it feels more like a natural, satisfying, evolution for the pair. Finn is branching out, while Rudy is slowing down. Finn’s moment of passion might not really mean anything to him or Stephi, but you’re happy for him nonetheless, whereas the scenes Rudy shares with Nadine are very sweet and reveal a side to the potty mouthed split personality we’ve never seen before, not even from other Rudy. Nadine’s Cinderella exit is pure set up for next week’s episode, but still intrigues.

Jon Brown’s script is top notch, with a number of elegant seeded jokes, sharp dialogue and some huge belly laughs. The key-knuckle-duster gag falls a bit flat, but otherwise it’s sterling stuff. Once again Rudy proves to be the highlight, his reaction after realising they’re at the wrong party, or suddenly popping up from behind the bed after waiting for Finn to ejaculate (despite the fact there’s a killer rabbit outside, what a guy) and jumping to the conclusion that Richard Saunders has shat himself because of the hallucination all had me in hysterics.

For the most part Jess and Alex’s story covers old ground. Jess wants to get intimate, Alex keeps pushing her away. The difference is the secret that’s been teased all series is finally revealed here – Alex has been cock robbed! It’s an utterly absurd answer, but one so perfectly Misfits we couldn’t have hoped for a better one.

Abbey is the other big news here. She makes an entrance you would expect of a main character on this show – intoxicated to the point of unconsciousness. It’s difficult to judge after such little screen time, but on first impressions she seems perhaps a little too spaced out, but that could just be the booze talking. Regardless, having another girl in the group (one who can hold her own that the boys don’t immediately try to bed) should hopefully get the sausage-dominated group dynamic back on track.

CRAZY CREDITS Of course, Natasha O’Keeffe should feature in the credits as she’s now part of the regular cast, but why show her in the orange boiler suit at the start of the episode? Anyone who’s been keeping up with the behind-the-scenes goings on at Misfits via Twitter will know she ends up in the orange eventually, but for more casual viewers it spoils one of this episode’s biggest surprises by cluing you in too early about how important she’s going to be.

SPECULATION We’d be very surprised if Abbey doesn’t have a power. Our best guess is she needs to drink to stay sober, like Bender in Futurama .

SPECULATION 2 Anyone else find the way Stephi blanks Finn at the funeral after they’ve had sex a little odd? Could be that she really didn’t want to speak to him, or perhaps there’s a power at play?

OLD FRIENDS Other Rudy first mentions Richard Saunders in the first episode of series three, reminding Rudy that he watched Saunders soaping his balls in the shower after a PE lesson and got turned on. In episode five of series three Rudy says that Saunders films himself crapping out of trees. Disappointingly, we don't really get to see why Rudy is such good friends with him. In fact, by the end you're left wondering why anyone would be.

MISSED OPPORTUNITY ...wouldn’t it have been more fun for Jess to discover Alex’s secret with a sneaky X-ray peek through his briefs?

BEHIND THE SCENES Jon Brown is the only other person to have written for Misfits along with creator Howard Overman, and this is only his third episode.

NITPICK Why did the rabbit take Jess down to the basement, rather than just killing her on the spot, like the first victim?

JUST WRONG OF THE WEEK A toss up between Alex dropping his pants and Abbey’s garish Beetlejuice leggings. It’s not just Finn, all the trousers are wrong this week.

FEATURED MUSIC Too many to list, but here are some of the highlights playing at the party: “ Sofi Needs a Ladder ” by Deadmau5, “ Empathy ” by Crystal Castles, “ Doomsday ” and “ Promises ” by Nero, “ 212 ” by Azealia Banks, “ Apnoea ” by Kasabian and “ Simple Beginnings ” by Fred V.

BEST LINE BY ANYONE ELSE
Jess: “46? Must have been one hell of a weekend. You could fill a coach with all those. A fuckbus.”
Alex: “It would be an awkward journey.”

• All our Misfits series four reviews on one handy page
• Read a preview of our series four feature and meet the new gang
• Misfits: What Is Wrong With The Youth Of Today? Book review