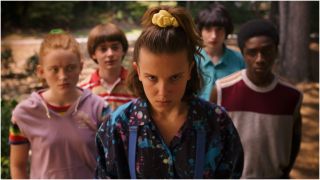 The Demogorgons are hungry, the Mind Flayer’s almost back to full strength, and Mike Wheeler’s motley crew of misfits are preparing to celebrate July 4. That can only mean one thing: terror is coming to Hawkins town with Stranger Things season 3.

The second season of Stranger Things concluded with Eleven, played by Millie Bobby Brown, managing to close the portal between our world and the Mind Flayer’s terrifying one. However, while the kids enjoy themselves at the school dance, it’s revealed that the monster remains alive and is seeking revenge.

Before Stranger Things season 3 reaches Netflix, our sister publication SFX Magazine sat down with Bobby Brown to discuss what to expect from the forthcoming episodes, with the actress teasing some “very, very threatening” new characters. She also spoke about the tone of the season, saying that season three is the funniest season so far.

Read part of the Q&A below, conducted by SFX magazine’s Adam Tanswell.

How would you describe Eleven at the start of season three?

Will life ever be normal for a character like Eleven?

I don’t think Eleven will ever be human or normal, because she has powers. This season especially, she has a lot of fun with her powers – but she can’t live a normal life because the Mind Flayer is very aware of Eleven. The Mind Flayer is very aware of what she is capable of because they came face-to-face in the rift and he looked me dead in the eyes. That is very scary for Eleven. The threat that he has on her and the threat that she has on him looms over them in season three.

This season has been described as the ‘Summer Of Love’. What do you think of that description?

I am cool with the ‘Summer Of Love’. Lucas (Caleb McLaughlin) and Max (Sadie Sink) have a cute relationship, as well as Mike (Finn Wolfhard) and Eleven. As an actor, it’s fun to play out their relationship on screen. Even though they are such a young age, Mike and Eleven are made for each other. They are very much in love.

What can you tease about the evil threats in season three?

There are definitely lots of threats in season three. It’s not only from the Mind Flayer. There are threats from characters, too. It’s always mind boggling to read the script and discover what’s going to happen. It’s fun to read what’s in store, but doing the scenes can be quite frightening. I can’t tell you too much about what’s going to happen, but there’s a very interesting dynamic in play this season – and it’s not just about the monster. Some of the characters are very, very threatening.

How would you describe the tone of season three?

It’s scary but it’s also funny. I feel like it definitely gets funnier this season. We shot this scene the other day where we laughed for a good two hours; we were laughing throughout the whole scene. That has never happened before. I am very excited about that.

What can you tell us about the new locations this season?

What notes do you receive from [showrunners] the Duffer Brothers when you’re shooting the show?

Since season one, we’ve all had specific notes from the Duffer Brothers. What’s funny is the fact that the main note I get is, “That was too human.” They will say to me, “You need to bring it down a little.” When people used to come on to the set in the first season and hear a note like that, they didn’t have a clue what was going on because they didn’t know anything about the character of Eleven. It was funny, but I’ve grown to learn the language of the Duffer Brothers and Shawn Levy, which helps you grow as an actor. Personally, I have learned so much on this show.

This feature was first published in SFX magazine. For more just like it, don't forget that you can subscribe to SFX and get the mag delivered straight to your doorstep (and your inbox) every month.

What movies did the Duffer Brothers ask you to watch to prepare for season three?

It’s funny you say that, because I shot a scene last night was actually the same shot as a Natalie Portman movie. I looked quite scary in it, but I can’t remember the name of the movie.

Was it a Star Wars movie?

No. I would have known if it was Star Wars, but it was a shot from one of her movies. They said to me, “You should go and watch this movie.” And I was like, “Okay.” I wish I could remember the name of it!

Do you remember the day the very first season launched on Netflix? What was life like back then?

I remember that day very clearly. It was July 15, 2016, and I was driving to Lake Tahoe from San Diego. I was in the car when the show came out and I remember looking at my Instagram followers on that day. I had 24 followers at that point, but three months later I hit nearly two million followers. It was a big change.

How much has Stranger Things changed your life?

Life has become a lot more hectic and busier, but that’s an incredible thing for me. It’s been an incredible journey and I am very excited for this season to come out so that everyone can experience it all over again. It’s going to be great.

This feature first appeared in SFX. For more like the one you've just read, be sure to subscribe to the digital or print edition of the magazine at MyFavouriteMagazines.