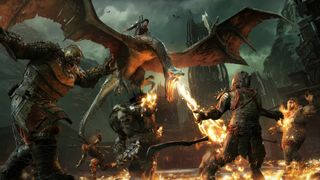 E3. Another crack at the Middle-earth: Shadow of War demo. Ahead of me lies an orc fortress, hard fortified and filled with… Oh look, you know where this is going. We’ve all been here, done that by now. Fortress. Armies. War Chiefs. Tactical assault. We know that part of the game is brilliant. So today, I’m not going to do that. Today, I’m going to turn back.

I’m not on the run, you understand. What I’m doing is looking for side-quests. We’ve seen a lot of SoW’s impressive, Nemesis-fueled castle battles over recent months, but very little of its open-world story content, and now I’m damned if I’m not going to find some. Running back through my army’s camp - a nice, picturesque, yet grotty slice of life, all tents, campfires, and friendly orcs milling about, doing whatever orcs do when they’re not popping skulls - I find a quest marker on the edge of the forest behind and head to it. ‘Hurrah!’, I think, full of the joys of waiting exploration. My day is about to take a very bad turn.

Tasked with investigating a disturbance in the woods, I quickly discover that this is one of those kinds of forest. You know the ones. Winding, twisted trees that look like they’ve been stretched into shape out of half-melted taffy, then flash-frozen and left to rot. Lilting, gentle music, floating almost ambiently on the breeze. The kind that would be perfect for meditation, or putting babies to sleep, if it wasn’t also utterly, butt-clenchingly terrifying. Oh, and there’s the raspy voice of a whispering woodland spirit. This is fine. If there’s one thing The Witcher’s insidious, rural, folklore horror has taught us, it’s that raspy, whispering woodland spirits are always just fine. And then I find the bloodied orc, wrapped in tree roots and begging for his life.

Walking up to him, I get an opportunity for psychic interrogation. I partake, and am instantly presented with a swirling, desaturated, first-person view of the forest, all haunting noise, panicked jabbering, and inevitable Bad Ends. I then flash back to my reassuringly third-person body, and the orc’s head explodes in my hands. I don’t like these woods. These woods are basically shit. But my journey into elegant, ethereal, total horrific misery is not over. In fact, it’s barely begun. Taunted to go on by the whispering wisp, I follow the misty path through the woods (because of course there’s mist as well) and eventually find another orc in a similar situation. And then another one. The woods have been busy. The spirit is everywhere and everything, and she doesn’t like visitors. And yet still I press on.

I’m not alone, mind you. Goblins and small beasts shuffle and scratch around the place, but none attack. They’re all in the thrall of… something, and all I can do is hope that said something deigns me the courtesy of keeping them that way. The sense of impending doom is thick and weighty.

And yet still I press on.

Final orc investigated, I turn around. Behind me is a giant, gnarled tree in exactly the same place that there previously was definitely no such thing. I think I’ve found my destination, and I do not like it one little bit. The tree likes me, though. It sends three rampaging war-beasts out to meet me, one of them encased in wooden body-armour. It’s a tough, frenetic, dodge-heavy fight, shaped primarily by my flailing ability to evade and parry attacks from three sides while scoring the occasional, desperate hit when I can. Ultimately victorious, I breathe precisely one sigh of relief, and then the wood-troll arrives.

This fight is really no such thing. Up close, I’m mulch. My only viable option is the old-school survival-horror strategy of running the hell away, and trying to put enough distance between me and he to squeeze off a couple of arrow shots. And then I must run again. It’s nowhere near easy, the troll far faster than he has any right to be, great at tracking, and also, it transpires, a big fan of throwing fireballs when I'm at long range. Fireballs I can’t always evade smoothly, because I’m too busy running away.

After a lengthy, attritional, permanently terrifying ‘battle’ (which may or may not take a couple of attempts), I finally down the monstrosity. I don’t even dare a sigh this time, and I’m right not to bother, because then the dragon arrives.

I’ll spare you the details of the encounter, but I’m sure you can imagine it. Lots of arrows. Lots of running. Lots of darting back and forth around the Big Tree in order to get the jump on the airborne, flame-spewing beast. More than a few sneaky cowers under foliage, as I snipe the drake through the canopy. But as for my reward? I get to meet the woodland spirit. Statuesque, fair of face, and uttering her thoughts with exactly the kind of musical, meandering accent that would put you in mind of Bjork (if Bjork was a total, living nightmare made of naught but contempt and malice). She explains that everything I’ve just been through is all my own damn fault. Having crafted a new Ring of Power between the last game and this, I’ve also accidentally woken up a balrog. Balrogs are made of fire. Forests don’t like fire. I going to have to clean up my mess, or the lady of the woods is not going to be happy. Did I mention that she’s 15 feet tall?

So yeah. Quest complete. Turns out that war isn’t the only thing to be scared of in Middle-earth. In fact, what I’ve just played through - for all of the game’s current emphasis on the epic, the cinematic, and the perpetually clanging and bloody - is as deftly constructed and unsettlingly underplayed as you could possibly want a fantasy-horror side-quest to be. I referenced The Witcher earlier, and I did so for a very good reason. Shadow of War’s story quests are clearly shooting for exactly the same standards, and right now, I wouldn’t bet against Monolith succeeding. I’m happy with the bigger picture in Middle-earth: Shadow of War. I’m very happy indeed.