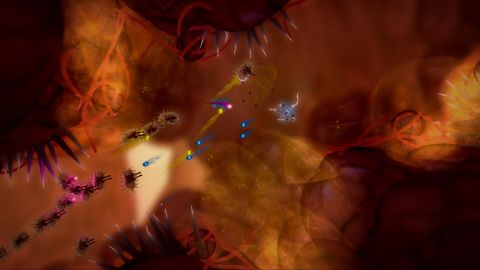 Quick, what would you say to a twin stick shooter that is essentially the dirty lovechild of Asteroids and the 1987 Dennis Quaid/Martin Short action comedy Innerspace? No, that isn’t a compliment. Hey, where are you going?

Such as it is with MicroBot: a downloadable snore fest for XBLA and PSN that may make you more frightened of the human body than you were during most good episodes of ER. Because, honestly, if these things were actually happening in a breathing human host, a total body shut down would be the result of the constant blasting and unnatural blood pumping that takes place during this game.

The plot (for what it is, anyway) involves some corporation shrinking your swimming war machine down to do some such to other shrunken war machines/ electric fences/possessed cells and infections that you encounter in someone’s body (which, of course, is natural to the human condition). With all of that stuff that we just mentioned, it should be obvious that the setting becomes inconsequential after about ten minutes into the game, but that might be the point because that’s probably about as far as your attention may span.

To be fair, MicroBot does have a few things going for it. As a twin-stick shooting game, you are given lots of options for upgradeable weaponry and customized loadouts. Enemies drop potential upgrades that are collected like experience points; harvest enough and you unlock a new weapon, propulsion system, defensive shield, and other equally useful items that you can place in different positions on your craft. As the game progresses, more slots are unlocked for you to arm what you collect, and currency is collectable in the game to upgrade these various systems. Upgrade fetishists will have plenty to keep them busy.

MicroBot also looks pretty good for a downloadable game this size. The first world (of five, with five levels making up a world) even looks convincingly enough like traveling through the human bloodstream. However, this quickly fades away into what is probably MicroBot’s largest flaw: the long, slow plod through each redundant level. Each individual level is randomly generated, making the game theoretically different with each play, but has a nasty habit of making the stage after the long, twenty-minute affair into the excruciating thirty-five-minute crawl. There simply isn’t enough variation in the levels to warrant a game like this taking as long as it does to play, even in small doses.

The nail in the coffin is the frustrating and imprecise movement of your craft. Knowing that you are in a freely floating environment – the human body is mostly water, you know – your ship will drift along and even be pushed by blood flows from open robotic valves (those exist, right?) when you least expect it. While some of the upgrades are propulsion systems for seemingly tighter movement, the more intense firefights can end in some cheap deaths at the hands of an environmental movement mechanic that was a great idea on paper executed poorly. Again, a lot like Innerspace.

Above: So we just got over the flu. This game must be based on a true story

It’s hard to recommend that someone drop ten bucks into a prettier version of a game you might play better on a site like Kongregate or Newgrounds, but there really isn’t anything god awful about MicroBot, just nothing at all very good. There’s probably some DLC out there that is a better use of the digital cash you may have gotten for Christmas, because like that bad eggnog you probably drank, you’re going to want to leak MicroBot out of your system sooner than later.