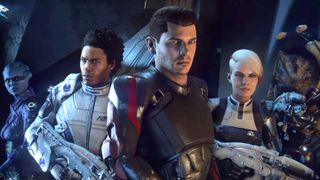 Romance in Mass Effect: Andromeda will have much more room for grey areas than its predecessors. And I'm not just saying that as a reference to alien nudity. There was a certain charm to the simplicity of Mass Effect's "you did all my dialogue options so we're dating now" love stories, but producer Fabrice Condominas told us that there's a lot more to going steady in the Andromeda galaxy.

"We tried to get more nuanced in everything linked to the relationships, which means also that you should take our real life experiences; there is way more [to it] than having a relationship means you have a love story," Condominas said. "So we wanted to get away from it – even in the first game, you could for example cheat and you would have all this, but it was still related to a love relationship; 'The reason Liara is angry is because…'

"So again, we’re trying to get more nuance by having, 'Oh they just have a sexual attraction to one another?' 'Oh maybe they just want to flirt'. Or the reverse, they just feel somewhere in between the friendship and a love relationship, but it’s still deeper than that [...] Our new tone system made that possible, because again – the binary limits what you can do."

In other words, Mass Effect: Andromeda relationships can be frickin' complicated. Just like real life. But that's not a bad thing! Condominas says Andromeda distances itself from cut-and-dry notions of what makes a good or bad relationship - whether you're playing the field or just forgot to do some loyalty missions.

"We’re trying to get away from any notion of judgement, or 'If I didn’t get all the loyalty missions I’m playing bad'," he explained. "No, we want to get away from those feelings, but it doesn’t mean that we change... for example, some characters will be pissed if you cheat on them but some of them won't."

Good to know. But the internet still has to decide whether it's going to date Cora or Peebee first, assuming you can't just take them both for romantic sunset cruises in the Nomad.