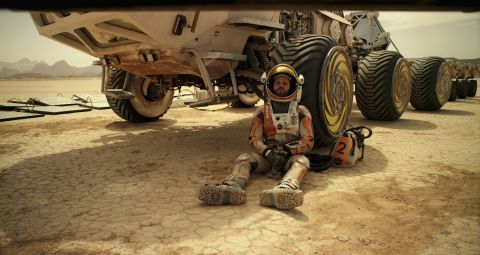 It’s not iconic sci-fi to match Alien or Blade Runner but it is a topical, supremely crafted, intelligent, heartfelt spectacle with gallows humour to die for. Strap yourself in.

“Four-and-a-half billion years, nobody here,” muses astronaut Mark Watney (Matt Damon) as he stands on Mars scanning the desolate desertscape. “And now? Me.”

It’s a miracle all right, and the magnitude of the achievement is set up by the very first image of The Martian, Ridley’s Scott’s fourth foray into science fiction: a rotating shot of space, immense, infinite, with the red rim of planet Mars blazing danger even as it acts as a beacon to human endeavour.

Only it’s a miracle that Watney would gladly trade in for a Big Mac or even one more sachet of ketchup when his supply runs out. A botanist gathering soil samples as part of NASA’s Ares 3 team, Watney is literally blown away when a sandstorm of Mad Max proportions sweeps in.

Reading that his biosuit has been breached, Captain Melissa Lewis (Jessica Chastain) reports “Mark Watney is dead” as the Mars Ascent Vehicle climbs above miles of swirling dust, a message that is in turn conveyed to a dismayed public by the Director of NASA (Jeff Daniels, effectively reprising his anchor from The Newsroom). Watney’s not dead, of course – Damon would hardly sign up for another cameo on a far-flung planet so soon after Interstellar – but sewing shut the ragged hole in his stomach is just the start of his problems.

How to get a message back to Houston? How to survive for four years with just 300 days’ worth of rations until the next Ares mission rocks up on Mars? And how not to go insane when the only music at your disposal is Captain Lewis’ disco playlist? All of which are nothing to the dilemma facing Scott and screenwriter Drew Goddard (World War Z): how to make a movie to tingles spines when its USP is sticking to hard science as one man sets out to grow some potatoes?

To a large degree, the answer to all of the above is ‘with good humour’. Laughing in the red face of death, Watney, far from undergoing an existential breakdown, knuckles down to “science the shit” out of his predicament, extracting frozen faeces from the Habitat’s vacuum-suction toilet and making himself some good ol’ H20 in order to rustle up 400 potato plants.

He logs all of his actions, thoughts and moods into a GoPro camera for future scientists to learn from (it sure beats drawing a face on a volleyball to allow your lonesome protagonist to talk to cinemagoers) and chills like The Fonz to episodes of Happy Days.

The wily director also knows just when we’re gonna need a montage to rattle things along in the pause before the big finale, and choreographs it, exquisitely, to David Bowie’s ‘Starman’.

Based on Andy Weir’s novel, which itself went on an incredible voyage from his website to a Kindle download to a New York Times bestseller published by Crown, The Martian is a savvy blend of the technical and the personal, of outer and inner journeys, and of teamwork and isolated glory. One man’s refusal to fold acts as an ode to the unquenchable human spirit, with science and Scott always on hand to quell any cheap sentiment.

Here, all is meticulous and measured, as befits a film signed off by NASA, whether piloting fist-pumping set-pieces or nurturing muffled moments of triumph (“Hey there,” murmurs Watney as he cups the first green shoot to poke from the red soil). Even the timely intervention of the Chinese space program – handy for boosting appeal in a crucial box-office territory – fits the story of humankind united by a singular plight.

Is it this year’s Gravity? Not quite, but then it never tries to be, despite sharing some of its narrative thrust and themes. More robust in story, less dazzling/ostentatious (delete as applicable) in its effects and camerawork, it does share, however, in being a brainy blockbuster engineered to soar at multiplexes and land with the Academy.

There will be tech noms, certainly, but maybe also a third acting nod for Damon in a grounded, hugely likeable role that fits his screen persona as snugly as Janty Yates’ slim-line spacesuits fit the actors. Heck, he deserves some kind of award just for his dancing to ‘Hot Stuff’…

It’s not iconic sci-fi to match Alien or Blade Runner but it is a topical, supremely crafted, intelligent, heartfelt spectacle with gallows humour to die for. Strap yourself in.