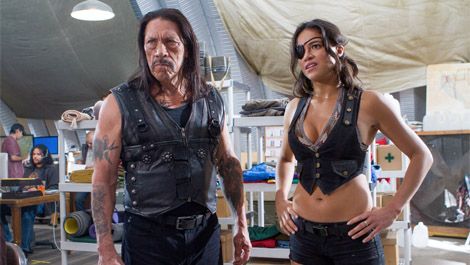 Beginning with a trailer for Machete Kills Again… In Space - Lady Gaga and Mel Gibson included - we're back in familiar territory: the taco-hued Southern badlands, where Machete (Danny Trejo) and Sartana (Jessica Alba) are fighting the cartels, as our hero is tasked with taking down Mexican revolutionary Mendez (Demian Bichir) by Charlie Sheen's foul-mouthed US president.

Initially fun, Machete Kills has weighty conceptual problems it never solves. Glaring like an outraged sultana, Machete repeatedly monotones that he "don't text" or "tweet". In fact, he don't do that much - except kill. There are three scenes that make messy use of rotor/propeller blades, and a (literal) blind shoot-out, as in Once Upon A Time In Mexico .

It's also hard to remember a film where so many actresses are murdered or degraded quite so casually. Boob guns and vagina punches proliferate; Machete's handler (Amber Heard) is a unscrupulous beauty queen; almost everyone else is a prostitute. It's exploitation, of course, but it's meant to be knowing, next-level, daring. Or at least funny.

Even the good ideas remain unformed - most notably a chameleonic assassin, played by, well, everyone. Worse still, the action's flat, Gibson's Star Wars -obsessed psycho turn embarrassing, the CGI dreadful, and the ending the most half-arsed since The Devil Inside .

Like a meal made entirely of chillies, Machete Mk II is spicy to start with, then unpleasant, then numbing - before it all starts to repeat.