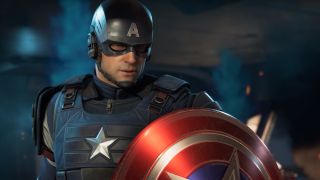 After receiving a mixed response from fans at E3 due to uncanny character designs and general confusion about the vision for Marvel's Avengers, Crystal Dynamics will hopefully reset expectations at San Diego Comic Con. We'll see more from the third person cooperative shooter during the Marvel Games Panel on July 18.

The gameplay reveal will happen at San Diego Comic-Con 2019 on July 18 at 1:30 p.m. PST during the panel. It'll have Crystal Dynamics creative director Shaun Escayg and the cast of Marvel’s Avengers on hand at the panel. The official description fort he panel can be found below:

"Join Shaun Escayg, Creative Director at Crystal Dynamics, and the performance cast of Marvel’s Avengers for a special presentation that will include new information and the first public gameplay reveal for Hall H attendees only."

Hall H is the biggest and hardest panel to get into at Comic Con, some fans line up all night to get one of the sought after seats inside. While there hasn't been any announcement about whether or not there would be a live stream for the event, one usually comes out during or after the panel. Although we'll have to wait and see what "attendees only" means. Will the footage be reveal shortly after or not at all?

The panel is part of Square Enix's greater plan for Comic Con 2019, although Marvel's Avenger is probably their biggest upcoming game at the show.

If you want to know more about the game here's how its combat designer from God of War is building better superheroes.