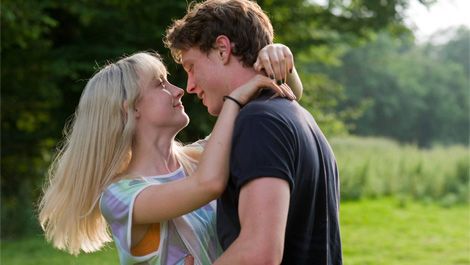 Six months on from flop Stephenie Meyer adap The Host , Saoirse Ronan makes a renewed bid to become the new K-Stew/J-Law, as the lead in another dystopian near future romance – this time based on Meg Rosoff’s award-winning YA bestseller.

Ronan plays Daisy, a disaffected American teen who tries to drown out the voices in her head with music and medication. Neither work. She arrives in a heavily fortified England to stay in her cousins’ artfully ramshackle middle-class farmhouse.

Despite her aloof act, Daisy is instantly smitten with telepathic cow-whisperer Edmond (George MacKay) and the two inexperienced teens are soon having Hollywood sex in the hay barn. Home alone due to a National Grid-crippling nuclear attack, the kids enjoy an idyllic Instagram-filtered summer… until jackbooted soldiers evacuate them.

At this point, the film lurches from E4 fare into a 28 Days Later / Children Of Men hellhole, with Daisy and cousin Piper (Harley Bird) forced to work the land like immigrant farmhands and live in a new-build.

And then it morphs into Cold Mountain for kids, the girls yomping down the Pennine Way, evading rapey males, in a bid to reunite with Edmond.

Director Kevin Macdonald has been here before, sort of, with The Eagle , and goes all-out on the war-torn portion. But his handling of the almost-incestuous romance feels clichéd, with its sickly score and sun-dappled loveliness.

Whether it’s the use of natural light or the aftermath of the terrorists’ brutality, How I Live Now looks terrific. It also feels like two tales grafted together.

It’s not helped by the dialogue sounding so ‘written’, the young cast acting like time-travelling E. Nesbit characters or the most intriguing elements – the telepathy – being jettisoned.

An odd mishmash of prim’n’grim, then. Close, but no S-Ro.

An Arab Spring-y allegory with kissing cousins and a divine countryside setting, Kevin Macdonald’s fourth narrative film is an awkward oddity, as uncomfortable in its own skin as its protagonist.