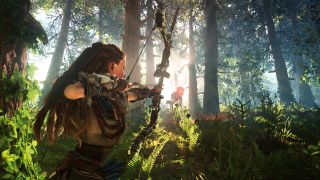 Horizon Zero Dawn 2, the all-but-confirmed sequel to Guerrilla Games' hit PS4 exclusive of 2017, could feature some form of multiplayer functionality, according to a set of newly discovered job listings on the studio's website.

Originally spotted on Reddit, Guerrilla Games has posted a number of vacancies in recent weeks which, when taken together, suggest the Killzone developer is returning to the multiplayer arenas of its past, with a listing for a Game Server Engineer specifically mentioning work on "systems like matchmaking, tournaments, clans, and leaderboards."

That phrasing has been mentioned on Guerrilla's website before, but a more recent vacancy for a Senior Game Programmer indicates that it could relate to Horizon Zero Dawn 2, and not a new Killzone title.

The posting confirms Guerrilla is working on an "epic open world game", stating that the desired applicant would help develop "ranged and melee weapons, combat and traversal mechanics, player skills, damage and hit responses, camera, inventory and economy systems",  and would preferably have experience in "multiplayer."

It's possible that these two postings refer to separate games; one being Horizon Zero Dawn 2 and the other being an entirely new project altogether, though previous listings from Guerrilla have already implied that the former is in full production. Interestingly, rumours of a SOCOM game in the works at the company have also been floating around for some time...

In other relevant news, more reports of a Horizon Zero Dawn PC port have recently emerged, while rumours of a PlayStation Meeting leave the possibility of a potential PS5 launch game reveal from Guerrilla on the cards within the next few months. Fingers crossed.