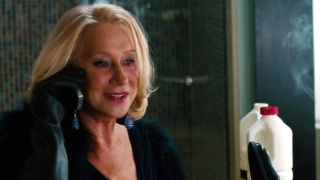 "How on Earth did they convince Helen Mirren to be in The Fate of the Furious," you may have asked yourself when you first heard about her casting. The Academy Award-winning actress isn't the type of person you'd expect to show up in a movie which also includes Dwayne "The Rock" Johnson altering the course of a torpedo with his bare hands, after all.

The answer is that they didn't convince her: Mirren specifically asked to join! Diesel told the story in the latest issue of Total Film magazine.

“People don’t know that I’m the one working for a year beforehand with the writers and coming up with the story,” Diesel explains. “She came up to me at a party last year and said, ‘I want to be in Fast & Furious with you.’ The script was [already] greenlit, but she told the right person, because a week later she got written in".

According to the rumors, Mirren plays the mother of Owen and Deckard Shaw, the respective bad guys of Fast & Furious 6 and 7. How do you play the mother of two very troubled gentlemen, one of whom is now working with the same group of people who helped put his brother behind bars? However she pulls it off, director F. Gary Gray told Total Film that Mirren brings "a little bit of humor and fun" to her role.

“When you play the Queen, where can you go from there?" Gray added, laughing. "Fast 8". Also the Red movies, which is where that top image comes from, but still.

Head to a newsstand near you and grab the latest edition of Total Film to read more about the making of The Fate of the Furious. And be sure to subscribe online to receive future issues in print or digital format.

Directed by F. Gary Gray and starring Vin Diesel, Dwayne Johnson, Michelle Rodriguez, Charlize Theron, Jason Statham, and many more, The Fate of the Furious races into theaters on April 24, 2017 in the US and April 14, 2017 in the UK.