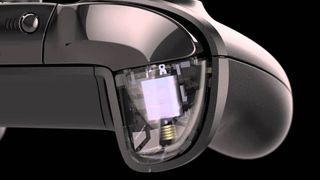 Whenever there's a new generation of consoles, there are always a few buzzwords that float around that seem to define the conversations around the new tech. For Xbox One and PS4, there came the chants of 4K and 60fps, and now as we look towards PS5 and Xbox Series X there are much more complicated phrases being bandied about as the next big innovations in gaming tech, such as ray tracing and haptic feedback.

Whereas ray tracing is about upping the visual fidelity and overall look of our games, heightening the realism of textures, shadows, and reflections in particular, haptic feedback is about adding realism to the way games feel. No, not emotionally, but rather getting physical feedback from your controller – or other peripherals – in a way that's more nuanced, and realistic, than your traditional vibration or rumble pack.

What is Ray Tracing?

What is haptic feedback?

Any gamer – or anyone with a mobile phone for that matter – is well versed in the art of vibration feedback. Whether you're getting a text or phone call, experiencing the rumble of the machine gun firing in an FPS or colliding with another vehicle in a racing game, that sense of vibration and its intensity is very familiar nowadays. But the problem with traditional rumble packs is that the vibration is all on one level, with little variation in its intensity regardless of its cause.

That's where haptic feedback comes in. Haptic feedback is all about better simulating what it would feel like to touch or interact with something in real life, allowing precision vibrations that help better represent what's happening in-game. Rather than the blasting vibrations of current controllers, haptic feedback allows there to be a lot more subtlety, ranging from the delicate splashing of raindrops to something more severe like an explosion.

While we may not immediately see the fruits of some of the visual enhancements coming with PS5 and Xbox Series X – like 8K for example – the benefits of haptic technology will be immediate. It's aimed at heightening your immersion, allowing you to feel more physically connected to what you're doing as you play.

Razer's Jeevan Aurol, who has worked with the company's own Hypersense haptics technology, explains that the benefits of haptics are easily palpable to a player, especially as it's "a lot more straightforward that visuals or sound. Visual and sound technology can be very subjective, depending on how in-tune you are with the subtle differences. But when it comes to haptics, you feel it."

Despite the fact it might feel like a buzzword right now, haptic feedback isn't actually a new technology, and no doubt you may well have heard about it, or experienced it elsewhere. Ever since Apple introduced its own Taptics technology back in 2015, we've been able to experience tactile sensations for games, notifications and more through iPhones, and Apple Watches.

But the technology already extends into gaming consoles too. The Nintendo Switch, for example, already uses haptic feedback in its pair of Joy-Con controllers. If you haven't already, go and try 1-2 Switch, a collection of mini-games that is not only fun, but does an incredible job of showing off the nuance of haptic feedback's vibration capabilities – particularly in the safe-cracking game where you can feel the notches on the dial as you turn it, and the ball count game that asks you to guess how many metal balls you can feel rolling around inside your controller.

Nintendo never actually calls the technology haptic feedback, it instead uses its own terminology called Rumble HD. "The Joy-Con can convey to you the feeling of ice cubes colliding in a cup," explained Yoshiaki Koizumi, general development producer at Nintendo, during the Switch's full reveal in January 2017. "You can even tell the number of ice cubes in the glass. And you can feel water filling the glass. This new sense of realism is produced by the precision of the new HD Rumble."

However, it's not just Nintendo that has already been experimenting with haptic feedback. Microsoft actually introduced the technology into its controllers with the original launch of the Xbox One. The Xbox One controller arrived with what Microsoft calls impulse triggers, which included adding four vibration motors to the pad. There's one behind each trigger, and one in each grip, which when combined creates a better sense of in-game directionality and depth, especially when it comes to gunshots, car crashes, and explosions.

At the time, Microsoft highlighted its benefits when playing a game like Forza Motorsport 5. It explained how developer Turn 10 Studios can use the impulse triggers "to provide players with precise feedback that enhances the racing experience. If your tires break traction from over-acceleration or if you drift on the gas pedal, the triggers emit very distinct vibrations.  This is combined with the chassis rumble that conveys impacts, engine roar and driving over surface irregularities like cobblestone."

Razer, on the other hand, isn't in the business of making console hardware, but is already experimenting with how haptic technology could be used in other peripherals – namely headsets. Last year, Razer debuted the Razer Nari Ultimate headset, which uses the company's own haptic feedback tech known as Hypersense to deliver vibration feedback through the headset's earcups. This allows the headset to not only deliver subtle vibration effects that you can feel on your face, but also enables positional feedback.

"There is one [haptics] driver in each ear cup. What this means is that you get stereo positioning when it comes to the haptics," explains Razer's Jeevan Aurol in an interview with GamesRadar. "Traditionally, in console game packs, for example, if there is an explosion, the controller will vibrate. But with the Nari Ultimate, if the explosion comes from the right, then the right ear cup will vibrate."

Razer's Hypersense uses drivers that are designed to produce a higher frequency of vibrations too, which means that players can be alerted to more subtle sounds, like footsteps, or something that is further away from you.

"If the explosion or gunfire is happening close to you, the haptics will rumble a lot more powerfully," adds Jeevan. "But if it's further away from you, you get the same effect, but in a more delicate manner, just to help bring out the distance and helping with the immersion – and, to a certain extent, even positional awareness with the headset."

How the PS5 haptic feedback will work

Now Sony is also heading into haptic feedback tech territory with its next console, the PS5. According to a recent interview with Wired, the PS5 controller (probably called the DualShock 5) will feature "adaptive triggers", which will offer varying levels of resistance, which will help simulate in-game effects like drawing a bow, or making a shotgun fire feel different to a machine gun, for example. This sounds very much like what Microsoft has already done with the Xbox One controller's impulse triggers.

Sony is also fitting the grips with similar haptic feedback options via "highly  programmable voice-coil actuators located in the left and right grips of the controller".

According to Wired's Peter Rubin, when "combined with an improved speaker on the controller, the haptics can enable some astonishing effects. First, I play through a series of short demos, courtesy of the same Japan Studio team that designed PlayStation VR's Astro Bot Rescue Mission. In the most impressive, I ran a character through a platform level featuring a number of different surfaces, all of which gave distinct—and surprisingly immersive—tactile experiences. Sand felt slow and sloggy; mud felt slow and soggy. On ice, a high-frequency response made the thumbsticks really feel like my character was gliding. Jumping into a pool, I got a sense of the resistance of the water; on a wooden bridge, a bouncy sensation."

It certainly sounds like the PS5 pad will offer even more refined haptic feedback than what we've seen before, and hopefully adopted by more developers than those that utilise the Switch's iteration.

Interestingly, the Wired article mentions that, according to product manager Toshi Aoki, the team has been working on haptic feedback since developing the DualShock 4, and it was actually ready to be released with the PS4 Pro. However, Sony believed that "doing so would have created a "split experience" for gamers, so the feature suite was held for the next generation".

What could haptics mean for next-gen gaming?

Regardless of the technology strand we look at for next-gen, it's clear the focus is on heightening our gameplay immersion: like making sure you spend as little time as possible looking at loading screens; streamlining the way we download games and updates; adding more realism to textures, shadows and lighting; to introducing or improving technologies like haptic feedback.

As much as the next-generation is going to be about visuals, it already seems like there's going to be a push towards making us physically more connected to what we're playing. It's just part of the next-gen offering though, so it's going to be interesting to see what role haptics play going forward.