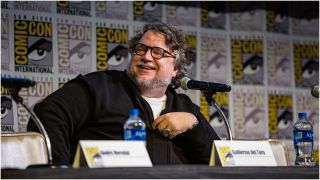 From the magical realism of Cronos, to the abnormal romance at the centre of The Shape of Water, Guillermo Del Toro's movies have consistently challenged genre boundaries. The through line of all his films, though, has been horror.

While none of Del Toro's efforts may be outright scary, the director wears his horror influences openly. Just look at Hellboy and Pan's Labryth, both of which feature creepy creatures and imagery that will haunt your dreams.

With Del Toro producing the forthcoming movie Scary Stories to Tell in the Dark, our sister publication SFX sat down with the director to discuss how he goes about terrorising cinema-goers dreams. Here's an excerpt from the interview, the full version of which can be read in this month's SFX magazine, alongside interviews with the cast of Scary Stories and a full preview of all the horror films coming later this year and beyond.

How do you go about scaring people?

As a director, I’m not that interested in scares. I use my horror movies more like a fairy-tale. I do horror images, but like a fairy tale. However, as a producer, I’m really interested in the scares with Juan Antonio Bayona in The Orphanage, and with Andy Muschietti on Mama, and André Øvredal on [Scary Stories to Tell in the Dark]. I’m very interested because it’s something that I enjoy watching. In this movie, you need to coax the audience with very elegant camera work and very good set-ups. There’s a high production value, too. Plus, I have lots of empathy with the characters.

What do you think about horror as an educational tool?

Fairy tales and horror divide nearly into two camps: cautionary and anarchic. There are horror movies in favour of obedience and horror movies in favour of disobedience. Some of them are anarchic and crazy. Some of them are, “Don’t go into the woods at night or a wold will eat you.” There's a lot of horror that’s pro-structural, pro-patriarchal and pro-institutions, but there’s also horror that is really, really anarchic and rebellious. In the Vietnam era, Night of the Living Dead was absolutely the horror of the disintegration of society, and us killing each other. Or you can find, for example, a movie that is very, very close to a cautionary fairy-tale like John Carpenter’s Halloween. That story poses the question: “Do not go out at night unsupervised. Do not mingle with each other in ways that are not moral, or something will come and kill you.” So there are both inceptions in the genre of horror and fairy tale.

Were there any discussions about going too far?

The first thing you have to accomplish is the marriage of the material and the director. If you can do that right then these discussions become fewer. For example, if I gave this to a director who has proclivities to upsetting violence, then I’m going to be fighting that instinct during the whole production. However, I knew Andre’s movies were incredibly entertaining. When he read the screenplay [to Scary Stories to Tell in the Dark], he asked: “Is this going to be PG-13?” We said, “Yeah.” Because that’s the spirit of the books. The books are loved because they are a ride, but with a safety bar. It’s safe. When you go to Disneyland, you don’t expect to shoot off the Matterhorn and die. You scream, but you know you’re going to land safely. That’s what we wanted.

Then this is a movie for everyone, or just for kids?

When I made the first Hellboy, I though: “The audience that I really want for this movie is going to be able to tell me what they think 10 years from now!" I was making that movie for kids and, sure enough, the people who grew up with it are the people who love it most. However, the beauty of this project is the way that it’s a horror movie that can be watched with the family.