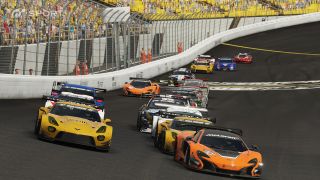 Kazunori Yamauchi is asked whether Gran Turismo Sport is in fact Gran Turismo 7, or if that’s coming later. After a short pause, he says with a smile: “Thinking about it now, we could have called it 7”. That’s nice to hear but, having played it at the unveiling event in London, I’m not so sure. This feels (and even looks) a lot like Gran Turismo 6. But don’t despair – by focusing on the competitive element on top of the already great foundation of that game, Polyphony has created something arguably more exciting than Gran Turismo 7: an actual new motorsport.

I’m not being hyperbolic, either. GT Sport’s online championships are officially recognised by the FIA, which is a Very Big Deal TM. And after watching the inaugural Manufacturer Fan Cup and Nations Cup being streamed to the world, complete with a real commentary team and surprisingly slick action replays of key moments (from different angles!), it is clear that the eSports potential here is absolutely huge.

The reason it works so well as a spectator sport because the game is forgiving to play. It’s far easier to control than the likes of Project CARS. The physics are still realistic (almost identical to GT6’s, though a little more grounded-feeling), but the assured movement and forgiving vehicle collisions makes for incredibly close, bumper-to-bumper multiplayer racing. There are still crashes and spins, but not so many as to be complete chaos. As a result, watching two highly skilled racers running nose-to-tail on the edge of control for half a lap of the Nordschleife is riveting.

Riding the kerbs is forgiving and won’t drag you onto the grass like Project CARS will, and direction changes are far snappier than Forza 6’s handling model. Still, the game engine is showing its age a little compared to these newer sims. You can still feel Gran Turismo 3 in there, with that wide wheelbase sensation that the series has had for some 15 years now still evident. It doesn’t feel as realistic to drive as Assetto Corsa (even using the same Thrustmaster wheel servo model), and that may be a problem. The competition has got much stronger since GT6 was released.

All of the cars have been remodelled from scratch and all contain interior views, although they were already so detailed, it’s hard to see any difference. Similarly, while tracks like Brands Hatch and Willow Springs have been completely re-rendered, the difference isn’t a generational leap. It just looks like a sharper version of GT6. Pretty, but hardly revolutionary. Still, it's said to be 50% complete so there's time for polishing.

New tracks were playable at the unveiling, namely a 0.5-mile oval (very short and hardly challenging) and a new Tokyo Highway circuit. The latter is disappointingly featureless and includes only one genuinely tricky corner, although its high-speed nature means any small brush with the wall will compromise you considerably in a race. Neither feels like a classic so far.

The front end has been redesigned, now offering a Forza-style livery editor for the first time, as well as tutorial videos, a beginner’s school, and a redesigned museum that places important moments of motorsport history next to notable events in art, music and literature. I can’t imagine many people will read it all.

There’s a revised photo mode too, called ‘Scapes’. You can select from over 1,000 high-quality backgrounds, place as many cars as will fit in the frame, then fiddle with exposure and aperture settings to create truly beautiful photographs, before exporting them at 4K resolution. The cynical could argue that Gran Turismo on PS4 should look like these photos in the game itself by now, but hey ho. At least you’ll have some cool new wallpaper for your PC.

A new ‘racing etiquette’ course promises to teach gamers about sportsmanship (good luck with that one), and the results will be reflected in a new ‘Sportsmanship’ stat on your online profile next to your overall speed rating. Your country, age and manufacturer alliance will also be recorded, which means you don’t necessarily need to win the race you’re in outright in order to pick up awards online. You’ll be able to track your profile through a companion app too, which is a nice touch.

While there are 117 single-player events and challenges to complete, it’s evident that online is where the game is intended to be played. Daily races will be held according to a set calendar, culminating in the fully-broadcast, FIA-approved finals at weekends. So while this may well just be the same old Gran Turismo we’ve been playing for years, the idea of that undeniably excellent - if aging - racing game allowing you to become a legitimate worldwide racing star is very exciting. Just think: you could become an FIA-recognised racing champion in your living room. That’s brilliant.

Gran Turismo Sport is coming to PS4 on Nov 15 in North America and Asia, Nov 16 in Europe and Nov 18 in the UK.