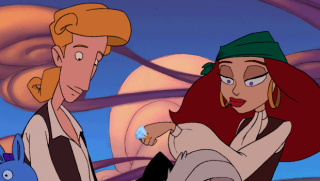 Sometimes two people just have a spark. Call it chemistry, call it magic, call it hormones. Whatever name you put to it, when you’ve experienced a genuine bond between two individuals, it’s impossible to forget. Video games can do a great job of capturing even the subtle nuances of a relationship. We’ve all had moments of vicarious joy watching these couples grow close over cutscenes or in casual filler dialogue. Whether it’s a passionate romance, cute flirtations, or just a genuine connection between two like minds, these are our favorite couples of video games.

Although Tracer's girlfriend, Emily, doesn't actually appear in the game, the story of their romance really shook up the Overwatch community. Emily was introduced via an Overwatch comic as Tracer's girlfriend, with a cute Christmas present fiasco, and then lines of dialogue were added to the game to reference her too. It was an important step to show Blizzard's dedication to diversity, and their love has been celebrated ever since.

They speak different languages. They face impossible odds trying to escape the Queen’s massive fortress. Yet Ico and Yorda quickly form have an implicit understanding of each other, and as you play, you’re internally cheering ever-harder for the pair to reach freedom together. From the moment he breaks her free of her imprisonment, there’s a trust between Ico and Yorda. Thanks to Ico’s immersive gameplay of puzzles and exploration, you’ll most likely wind up just as attached to the duo as they are to each other. Fumito Ueda’s quiet, minimal masterpiece proves that the tired old ‘boy meets girl’ concept doesn’t have to feel tired or old. In fact, it can be sweetly profound.

Not all great relationships are about romance. And not all the best couples are meetings of equals. Following the legacy of Don Quixote and Pancho Sanza, the bond between the player and Lydia is ultimate in hero and sidekick duos. No matter what kind of character you choose for your playthrough of Skyrim, you can have Lydia as your companion once you become a thane of Whiterun. That doesn’t take too long if you’re following the main quest line, so for many people, she’s also the first person who will fight by your side. Maybe that’s why Skyrim fans tend to have such strong feelings about her, good or bad. Her blend of bored resignation (“I am sworn to carry your burdens”) and eager-beaver helpfulness (seriously, she just sits and watches you sleep) makes her the standout of all the Skyrim companions

Long before Joaquin Phoenix and Scarlett Johansson asked the same question in Her, Halo fans were well aware that an artificial intelligence and a human could form a genuine bond. Cortana is always at Master Chief’s side. At first, she’s just the smoky-voiced, computerized guide telling him where and what to gun down. But over the course of the Halo games, they manage to showcase the live-or-die trust that defines the strongest relationships. Their exchanges get increasingly flirty up to Halo 4. In the game’s final scenes, Cortana sacrifices herself to save Master Chief, but also projects a physical version of herself so that they can touch for the first and only time. That particular type of relationship between stoic soldier and sweet support is a cliche one in games, but this is a take on it that makes us smile.

When a relationship has moved past the early stage of flirtation and butterflies, that’s when the weak might give up. But the strong will put in the work, weathering the challenges of building a life with another human being. John and Abigail Marston in Red Dead Redemption stay together through not just the ordinary hurdles of sustaining a relationship, but also through the harsh reality of life on the western frontier. If your relationship can last through years running in a gang together and through settling a homestead, then you’ve got something real. The Marstons know what real commitment is.

Relationships demand lots of open, two-way communication in order to succeed. That makes Half-Life 2 a strange choice here given that one person is completely silent for the entire game. But the plot arc and subtle writing for the character who does talk has made Gordon and Alyx a fan favorite among gaming couples. Maybe it’s the whole opposites-attract idea at play. Gordon’s cold stoicism does make him a foil for the warmth and wit of Alyx. They’ve also gone through some serious shit together and they do engage in some lively flirtation. Whether they’re in love or not doesn’t matter. The duo is still one of the best in-game pairs we’ve seen and it’s just nice to think that there’s something real between them.

She’s a pirate of influence and renown governing the Tri-Island Area. He’s a bumbling, naive pirate wannabe. Odder couples have gone the distance. The Monkey Island games have charmed legions of fans with their humor and silliness, but there’s also a lot of heart in this saga. Guybrush and Elaine are an unstoppable team when they work together to combat the many appearances and reappearances of the dread zombie pirate and all-around jerk LeChuck. Like any relationship, they’ve had their ups and downs, but the devotion to each other is equal parts heartwarming and hilarious. Most marriage vows end with “til death do us part,” but even death can’t separate these swashbuckling sweeties.

Some game characters you just have to protect, and Parvati Holcomb is one of them. She’s enthusiastic, clever and incredibly talented, but also humble, naive, shy and so people-stupid that seeing her interact is like watching slow-motion car crash films. Except the test dummies are sentences. But her puppy dog love of life means when she reveals growing feelings for another engineer, Junlei Tennyson, all other missions are put on hold while you help bring the two together. It’s a beautiful moment too, as all your hard work culminates with the engineering couple finally having a date, and revealing they both have about the same social skills as a really fancy clicky spanner. But, by the time it’s done, the two are a couple and Parvati’s so elated she leaves you to “happy-scream into my pillow for like an hour”.

5. You and the Companion Cube

You know that feeling that corny rom-coms show? The one where two strangers lock eyes across a crowded room, sweeping music plays, and the people just know that they’re meant to be together forever? That’s the sensation Portal manages to create the first time a player looks at the Companion Cube. First you laugh it off as a silly gimmick. But in no time, you’ve fallen head over heals for this block with hearts on it. And if you didn’t feel heartbroken when you had to toss the cube into the incinerator, then you truly are - as GLaDOS would say - a monster. Great couples have a bond that can’t necessarily be explained. Portal makes that magic happen, and the vast volume of fan art and adoration for the Companion Cube shows how sincerely people felt about it.

It doesn’t matter whether you romanced the Turian or not, Mass Effect’s Garrus is the best bro an RPG protagonist ever had. He’s always got your back. He’s loyal, thoughtful, and as quick on the trigger as he is with his wit. In a game swimming with memorable characters, Garrus stands the test of time as one of the realest friends we’ve seen in a game. Maybe you decided to make that friendship the basis of something more when you played Mass Effect, and kudos to you for locking down that hot piece of avian ass. Even if you took the purely platonic route, there’s no denying that Garrus and Shepard are one of the ultimate power couples of interstellar world-saving. Whatever you chose for the nature of the bond between them, these two are electric together.

Nothing like adventure to bring two lovebirds together. Nathan Drake met Elena Fisher when she joined his team to film their search for riches way back in Uncharted: Drake’s Fortune. Over the course of several more games, in spite of the temptations of treasure and other people, things between them progress from mere flirtation to a serious commitment. In Uncharted 4, the depiction of their married life certainly ranks as one of the best parts of an already excellent game. The stars aligned behind the scenes to help make this couple so memorable. The voice acting of Nolan North and Emily Rose creates genuine chemistry between the characters. The games’ snappy writing drips with sass and flirtation. They’re a match of equals, both equally at home with history or with firearms.

Everyone has their favourite game in the Final Fantasy series, and everyone has their favourite couple. Tidus and Yuna of Final Fantasy 10 are our choice from the franchise thanks to their touching transformations, both together and as individuals, over the course of the game. They are on their way to destroy Sin, after all. That’s a bonding experience that’s destined to forge some strong feelings. Even though the English voice acting is questionable at best, everything Tidus and Yuna say to each other demonstrates a real depth of feeling. The sincerity of their relationship makes this an enduring standout among video game couples.

Chloe and Rachel's romance in the Life is Strange prequel, Before the Storm, manages to perfectly capture the rollercoaster of emotions you experience when you first fall in love. The complexity of moving between pure sadness and elation, and everything between, plays out across the episodes, exploring the blooming romance between the young women. You can, of course, choose how far their relationship goes, but there's no doubt that this love will go down in history as the most intense - particularly as a player.