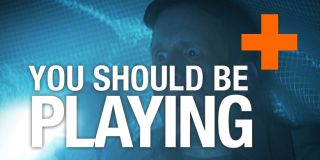 Remember FMV games? Night Trap? Sewer Shark? Phantasmagoria? Back in the '90s, cutscenes by way of full-motion video were everywhere. As fascinating as they were technologically, hammy acting, poor video quality, and gimmicky design ensured that these games would end up being the butt of many jokes for decades.

But over the last couple years, something's changed. High-quality digital video is cheaper and more accessible than ever to produce, and a generation of developers who grew up playing these FMV games have taken the concepts they introduced and expanded on them, combining the magic of film and the power of interactivity to bring players in like never before. The Bunker is the latest FMV revival, an independent game from Splendy and Wales Interactive, and it's basically a two-hour-long interactive movie that will force you to put its protagonist through a physical and emotional wringer.

It's the 1980s and the bombs have fallen. The end of the world is here, and whatever life that existed before has been extinguished in an instant. But John doesn't remember any of that. He was born on the day the world ended, deep underground in a nuclear bunker. For years he's lived there, the only child among a group of scientists and military leaders all trying to survive until the fallout clears.

Thirty years have passed. Everyone else is dead. Now, as the bunker's only survivor, all John has to do is stick to the routine: take his vitamins, eat, check the radio, check for radiation. Not much of a life, but hey, at least it's a life.

But a story can't exist without conflict for too long, and something in the bunker inevitably goes horribly wrong. Over the course of this film-like adventure, you'll navigate John through a series of environments, explore the deeper levels of this fallout shelter, figure out what happened to the other vault-dwellers, and attempt to survive while everything falls apart around you.

It's a concept that could either turn out emotionally gripping or incredibly maudlin and cheesy, but it's sold almost entirely on the performance of Adam Brown (aka Ori from The Hobbit film trilogy). Our protagonist and player-character John acts as your guide through this harrowing experience (filmed on-location in a real, decommissioned nuclear bunker); a feckless mama's boy who's never known anything other than a life underground, and is totally unprepared for the events that are about to go down. There are flashbacks that unfold while you play, but for the most part, The Bunker is a one-man show, and Brown does a fantastic job at conveying the gravity of the situation through the lens of this man-child of a character.

The other hero here is the sound design and music, and the John Carpenter-ian strains of its synths and the quality foley work help sell some of its more distressing moments. There's a part near the halfway point where you have to perform some menial labor in the bunker's lowest level, and all of the sound and music cuts out - save for John's rhythmic, frightened breathing. Playing in the dark with my headphones in, this scene got under my skin in in a way few games have.

You won't do terribly much on your brisk-yet-haunting journey through The Bunker; the most demanding inputs required of you are a handful of button-mashing sequences and reactionary events near the end of the game. But The Bunker isn't trying to be a hardcore adventure game, filled with 'he'll remember that' dialog choices or head-scratching puzzles. Instead, The Bunker is trying to sell a mood and a story, and by giving you the ability to interact with that story - even if that interaction is as slight as it is here - you're brought into John's plight that much more.

So if you're looking for something new to binge on and don't mind getting a little weird, forget Netflix. Set aside a couple hours, grab The Bunker, pop some corn, turn out the lights, and hang on tight to your controller.