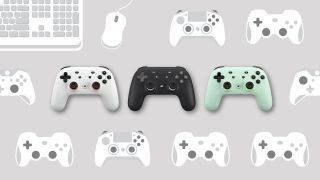 Sneaking in just ahead of E3 2019, today Google Stadia's event revealed pricing, launch games and more. So what is it going to cost you? A Stadia Pro subscription gets you up to 4K Resolution, 5.1 surround sound, free games and exclusive discounts for $9.99 a month.

A free Stadia Base subscription will let you buy games as and when you want them, but that service won't be available until next year.

A special Founders Edition of accessories includes a limited edition 'night blue' Stadia controller, a Chromecast Ultra, 3 months of Stadia Pro, a Stadia Buddy Pass, the chance to secure your Stadia name early and Destiny 2: The Collection. It'll set you back $129 (or £119) and you can pre-order it now.

Stadia will launch in November in 14 countries including the US, UK, and other European territories, with more planned for 2020.

Based on the Project Stream technology Google launched via Chrome last year, which let you stream Assassin's Creed Odyssey to your browser, Google Stadia will let you play high-end games on almost any device, including Pixel phones. Say goodbye to boredom, and hello to a bigger broadband package.

It looks like the big details have leaked on Google Stadia with a few hours to go yet before its big E3 2019 presentation. French Canadian outlet La Presse published a story that reveals Stadia will launch in November 2019 and require an initial purchase of hardware and a subscription, though those requirements will change as the service grows. The article also features interviews with Google executives, so it looks like La Presse likely had an early briefing from Google but hit the "publish" button a few hours too early.

First, what you're actually here for: the Google Stadia price will be $169 CAD (about $125 USD or £100) for a "founder's edition" kit that comes with a controller, Chromecast Ultra, a Stadia copy of Destiny 2, and a three-month subscription to Stadia Pro (the actual name may differ in English). Stadia Pro includes a library of free games streamed at up to 4K resolution and 60 frames per second, and will cost $11.99 CAD a month once your initial three months elapse. You'll also be able to purchase permanent access to additional games through the service.

"Impossible on a PC or a console"

Read our in-depth feature on what Stadia could mean for the future of games.

On top of Destiny 2, the launch lineup for Stadia will reportedly include Assassin's Creed Odyssey, The Division 2, Doom, and all three Tomb Raider reboot games.

A free version of Google Stadia will reportedly become available in 2020, with streaming locked to a maximum resolution and framerate of 1080p / 30 FPS, as well as including no access to the free library of games. However, you will be able to keep playing any Stadia games that you own outright or own a license to. What is property in a world where everything's streamed to us from remote servers anyway?

Stadia will only be playable through Chromecast using the dedicated controller at launch, but Google says it will expand to anything with a Chrome browser and a range of mobile devices in 2020. In any case, you'll reportedly need at least a 10mbps down connection to use Stadia and a 35 mbps down connection for 4K/60FPS, both of which are surprisingly low - we'll see how that shakes out in real world conditions.

Some of the spoils have been surprised, but you'll still want to watch the Google Stadia E3 2019 presentation for more details and the official word - or see what else is going on in games and entertainment this week with our latest Release Radar.