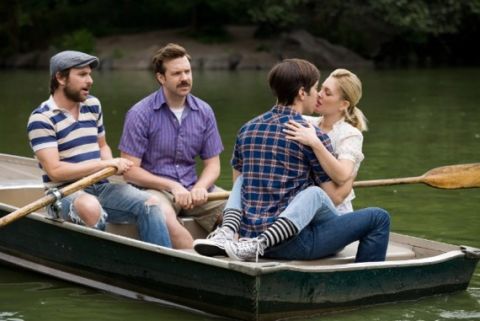 Going The Distance review - After sharing celluloid with a crowded ensemble in He’s Just Not That Into You, real-life couple Drew Barrymore and Justin Long get more time to themselves in this, their second moviedate.

He’s Garrett, a lowly A&R man. She’s Erin, a student wannabe journalist. They meet in New York and spend six glorious weeks together. But she must return to San Francisco to study.

Will they make their coast-to-coast relationship work? Will they indeed ‘go the distance’?

From the corny ‘see what we did there?’ title to a plot that’s as predictable as a transatlantic flight-path, this is a truly join-the-dots romcom.

Gross-out mates? Garrett has two of them (Jason Sudeikis, Charlie Day), so check. Lazy pop culture references? He’s got a thing about Top Gun, so check. Wise-cracking gal-pal? Che… no, wait, in a radical departure from genre convention, Erin has a highly strung, over-protective sister (Christina Applegate) as back-up instead.

You have to wonder why, after two excellent docs (The Kid Stays In The Picture, American Teen), director Nanette Burstein plumped for this as her feature debut.

What really rankles is that while the leads take care of the chemistry, the film doesn’t take care of them. Long is a rising comic star, just the right side of nerdy to be likeable, but he’s given little chance to stretch here.

Barrymore, meanwhile, is an old hand at this kind of thing, but whenever she and Long strike sparks, the film follows through with a damp squib.

Take the eye-rolling bit where their make-out session is interrupted by Garrett’s flatmate blasting out ‘Take My Breath Away’: in a nutshell, that’s Going The Distance.