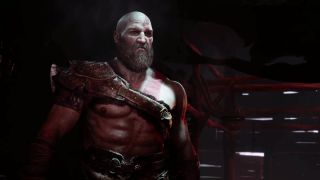 If you're still dissecting the God of War reveal trailer for details and insights (we certainly are) then Sony has a handy new video for you. Combat designer Mihir Sheth and gameplay engineering lead Jeet Shroff from Sony Santa Monica Studio have recorded their own (obviously well-informed) commentary for the impressive demo, sharing insights on everything from Kratos' relationship with his son to the new camera angle.

For one, they clarify what those pop-up messages like "Knowledge Gained: Archery +50" actually mean. As their journey continues and Kratos has more 'teaching moments' with his son, the boy will become both a more capable survivor and helpful ally for Kratos - like when he pops that troll with a lightning-charged arrow.

Sony didn't provide any kind of a release window for the new God of War, so we may be waiting a while before we get to play out our own father-and-son mythological beat downs. Perhaps if you stare long and deep enough into Kratos' magnificent beard an answer will form…