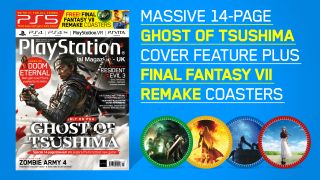 Ghost Of Tsushima, Sucker Punch's highly anticipated PlayStation 4 samurai epic, sneaks onto the cover of Official PlayStation Magazine (OPM) this month in a special 14-page look at the anticipated PS4 game, which - as we investigate - has been hotly-tipped as a next-gen PS5 title, despite no official confirmation from Sony.

Ghost Of Tsushima is shaping into one of the best upcoming open world games. Blending together aspects of Assassin's Creed and Red Dead Redemption, this could be PS4's best new game. Coming just ahead of PlayStation 5's release date it also raises questions over Sony's approach to cross-generation releases.

We pose the question this issue: "It’s launching quite close to PS5’s ‘holiday 2020’ release date. If The Last Of Us’ PS3-to-PS4 remaster is anything to go by, might this be one of the earlier experiences we can try out again on the new hardware?"

Going hands-on with Doom Eternal ahead of release proves this sequel is far more than a rehash of the original's best ideas. Adding platform puzzles, multiple locations from Hell to Heaven and in between reveals a shooter at the peak of its game. Read the full hands-on preview in the latest issue of OPM, on sale now.

It could be the biggest RPG you've never played, as Granblue racks up over 25 million players in Japan. The phenomenon is heading to PS4 this year as Granblue Fantasy: Relink, and we're convinced it's a game everyone should scribble on their must-play lists. Co-developed by Platinum Games this action-RPG is shaping into a beautifully crafted, colourful adventure. Read our first-play preview in issue 172, on sale now.

The creator of Nier: Automata, Yoko Taro, speaks exclusively to Official PlayStation Magazine this month. Issue 172 sees Yoko Taro sit down with FFXIV's producer and director, Naoki Yoshida to chat about bringing the two worlds together in YoRHa: Dark Apocalypse.

Taro reveals his how he felt the first time he met the Final Fantasy legend: "I didn’t know what kind of person Yoshida-san was until this project, so I was a little scared. After meeting him in person, I could see that he was a hard-working and powerful person. He’d be my choice for a future president of Square Enix"

You can read the full interview in OPM issue 172, on sale now.

For more unrivalled developer access to the hottest PS4 and PS VR games, why not subscribe to Official PlayStation Magazine? You'll save on the cover price and have your copy delivered to your door (or device) each month, complete with exclusive subscriber covers – such as this month's alternative Ghost Of Tsushima design.