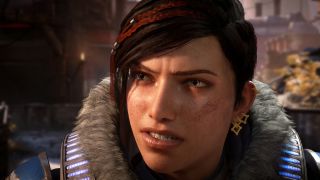 Gears 5 developer The Coalition has banned in-game smoking across the Gears of War universe following discussions with anti-tobacco groups.

Whilst we've become accustomed to seeing Barrick chain-smoke cigars, going forward Gears 5 will be a strictly smoke-free zone despite its mature age rating after the Truth Initiative - an anti-smoking campaign group dedicated to eradicating smoking in young people - approached broadcaster Turner. As the broadcaster behind this weekend's Gears Summer Series Invitational tournament, the developer was asked to end "the pervasive reemergence of glamorised smoking imagery in pop culture".

"We commend [The Coalition] for taking smoking out of Gears 5 and ELeague for featuring this tobacco-free game during this weekend's competition," said Truth Initiative's CEO and president, Robin Koval (thanks, Variety). "We are hopeful that this decision will encourage other game developers and streaming tournaments to follow this lead and level up the gaming experience by going tobacco-free."

"I've seen firsthand the devastating impact of smoking," The Coalition boss Rod Fergusson said. "It's always been important for me to not use smoking as a narrative device, which is why we made the conscious choice to avoid highlighting or glorifying smoking in Gears 5 and throughout the Gears of War Universe moving forward."

Insisting smoking is not as harmful as the game's violent content, Turner senior VP, Seth Ladetsky, said the decision has taken "a lot of time and a lot of good thinking", and maintained it was "the right image for ELeague - and the game itself - to project".

Ladestsky further added that whilst there's no evidence of a link between violent crime and gaming, there is purportedly a link between smoking habits and exposure to smoking depicted in media. He also said removing tobacco use from Gears 5 "doesn’t change the nature of the game itself".

Check out our list of all the upcoming Xbox One games you should be excited about.