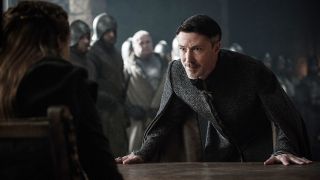 Game of Thrones is a life lottery. While death is far from random, every character in the show is disposable, from the very biggest (Ned Stark, Robb Stark, Jon Snow) to the not quite so big, but still painfully significant (Ser Barristan, the Sand Snakes, Oberyn Martell). Your survivability depends on a number of factors, and some characters are better at tipping the scales in their favour than others. Littlefinger was a master of survival, changing his allegiances and manipulating others to stay one step ahead of any potential executioners. ‘Was’ however is the operative word. The final episode of Game of Thrones season 7 sees him executed by Arya, after his plan to turn the Stark sisters against each other spectacularly fails. I caught up with Aidan Gillen, who plays Littlefinger in the show, and Pliou Asbaek, who plays Euron Greyjoy, to talk about death, villainy, and steering clear of social media.

“I don’t really think of myself as a villain,” says Gillen. He has a brief exchange with Asbaek, and adds a caveat. “I don’t think about my character in those terms, although I did write a list recently of all the deaths I’d been responsible for (or partly responsible) and there were so many of them I was like ‘OK, I am kind of a villain…’ So, I am a villain but I’m... trying to be liked and make people feel for me and see the reasoning in it all”.

Along with Euron Greyjoy and Cersei Lannister, Littlefinger was one of the few remaining bad guys in Game of Thrones. With the show killing off Ramsey Bolton in season 6, and blurring the morality of Jaime Lannister and Theon Greyjoy since season 3, there is an ever dwindling number of out-and-out villains. Too many characters are either being redeemed, or killed off. Gillen reflects on this: “It’s finally demonstrated in the case of Nikolai’s character – Jaime Lannister – that the characters in a show like this... where you’ve got the opportunity to take 60 or 70 episodes to tell the story, they change, you know? And it happens a lot in this season, where someone can be redeemed. To go from the guy who pushes Bran out of the window to where he is at the moment, where he became in season 3... it’s quite a feat.”

To an extent, this was inevitable. There’s only a single season remaining, and it’s shorter than every other one, so there are plenty of plot threads to tie up in a short stretch of time. Redemption can only come for a limited number of characters, and in the case of Littlefinger he was too far gone. Season 7 was guilty of rushing its storytelling in a number of places, and many key events felt unnaturally compressed, so someone had to be sacrificed. He felt like the right choice, and in an earlier interview I did with Gemma Whelan, who plays Yara Greyjoy, she joked that the “characters are so brilliantly drawn and different from each other, and yet in every single one there’s something we can all relate to. Although maybe Littlefinger is the only one I can’t relate to”.

We’re well beyond the books now, which means everyone is up for grabs. While George RR Martin remains an executive producer on the show, steering the story a little to fit with his overall plan, it’s really down to the showrunners (David Benioff and DB Weiss) to decide who live and who doesn’t. Gillen explains: “When it got to the point where the show had overtaken the books, that was an interesting moment because then you couldn’t reference anymore. Before that of course you could just look up and see what happened to this person and that person and then... so the actors are in the same position as the audience, and the characters are in the same position almost as the audience”. Gillen than adds, somewhat wistfully, that “anyone’s end should be unexpected, you know? It should be a kind of bolt from the blue”. While the death of Littlefinger in episode 7 - The Wolf and the Dragon - could have been predicted, it was far from expected.

Sansa and Arya’s bait and switch outplays Littlefinger in his final scene, and leads to his rather ordinary execution, bleeding out on the floor of the Great Hall in Winterfell. As a character, Littlefinger would be furious - all his grand planning and ambitions to be King spilled to nothing on the cold, grubby ground in the north. It’s the cruelest of deaths for a character with such lofty aims.

Euron, however, remains intact. As one of Cersei’s few remaining allies, now that Jaime has decided to turn his back on her, the pressure is on to fly the villain flag in season 8. Yet Asbaek too refuses to accept the label of Euron being an out and out bad guy, and he gives his thoughts on why Littlefinger (and Euron) are more complex characters than many give them credit for. “We see Littlefinger as this... we can’t quite comprehend him, we can’t quite decide if he’s good or evil, and we fix our minds, we lock our minds into that idea of him,” he says. “And then it’s very, very difficult for an actor, even though you do all these things where you do try and be good. Then the show has you push a woman down a little hole and stuff like that... shit happens. I actually think that we as actors consider ourselves, our characters, to be trying to do their best. But because people have locked their heads into ‘He is a villain’ - it’s very difficult to change, right? How many times do you have to do something good to become a good character? I don’t know”.

There were a number of popular fan theories about Littlefinger, before his death. One stated that he was going to marry Cersei and try to become King of Westeros, while another suggested he wanted to marry Sansa and kill Arya. Both seemed plausible, if now redundant. I ask the pair about the rumours and theories they hear about themselves online.

“I think if you want to have an honest and clean soul you should stay off social media!” Laughs Asbaek. “You can always read some weird theories and stuff – but this is all a part of the Game of Thrones life, this is the reason why this is one of the biggest shows. I’m not going to sit here and say ‘I don’t appreciate it’ because the more we work together, the more theories are created, the more lively talk there is regarding Game of Thrones. But I remember when I did Borgen – I was so young and I read all the critics and all the reviews of that show, and they hated it in Denmark. It was ‘banal’ and ‘simple’ and ‘not how the political world worked’. And then I went and thought to myself ‘I’m never going to do that again!’.” He chuckles again, but then adds more.

“This year I learned a new word called ‘cosplay’?” he laughs. “I fucking love it! I love it so much, just people dressing up as your character! And there’s this incredible wonderful guy, and I think he’s from the Philippines or something, who loves Euron Greyjoy and he’s dressed as him and he made his costume, the one I’m wearing in season 6. And I was just like ‘Dude, wait for season 7, you’re going to look fucking awesome in that one man!’.” Whether or not Asbaek has seen the cosplayer recently remains to be seen, but there’s no doubting his sexy pirate look from the start of S7 is far superior to the ‘old fisherman’ garb of season 6.

It’s easy to forget that Euron Greyjoy has only been in Game of Thrones for a couple of seasons now, and he has already established himself as a fan favourite bad guy. For me, he was the highlight of episodes 1 and 2 in season 7, and his introduction in season 6 remains one of the best entries for any character in the show. He appears at Pike, during a fierce storm, and throws Balon Greyjoy - his brother, and ruler of the Ironborn - off a bridge. Asbaek remembers it surprisingly fondly, despite the challenging conditions.

“Being on a bridge in Belfast in the middle of nowhere with fake rain and Patrick [Malahide] standing next to me was... We shot for 12 hours, and the wall of rain was so cold we could only shoot for 30 seconds at a time because you would freeze. And you would be standing there and it was my first day of shooting, and if I’d been a season regular for five seasons, I’d have been like ‘What the fuck is this man? Why are we shooting this?! I hate it so much!’ But it was my first day, so I was just taking all of it in.” In many ways Asbaek - like most actors in Game of Thrones - just feel fortunate to be part of it all. From speaking to them all, I get a genuine sense of community and family, and the humour between them is apparent throughout my interviews.

We wrap things up by talking about death again. How long does Asbaek expect to stay alive? He’s in for the final season, which is as much as any Thrones character can ask for. When is death coming for Euron, does he think? Asbaek is evasive, but upbeat: “When we were sitting at dinners last year, we would discuss it for fun but it’s because, what else should we talk about? (Laughs) You know? We can’t talk about football all the time”. Gillen chips in “I can’t talk about football at all!” Nor can he talk about death, either, as his character - one of the show’s most complex and enigmatic - has gone for good. And Game of Thrones will never quite be the same again.

Game of Thrones Season 7 is available via Digital Download now.