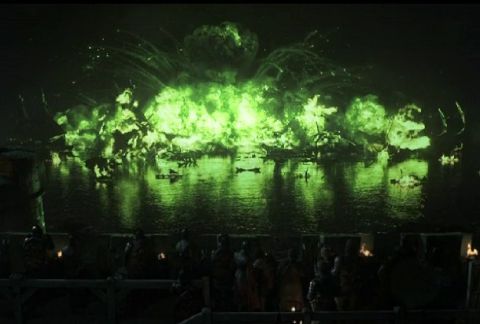 The one where: The war arrives at King’s Landing.

Verdict: Well that was all very exciting wasn’t it? After the best part of two seasons, Game Of Thrones finally got the battle it deserved, a nerve-shredding, blood-soaked hour that left the viewer as shell-shocked as Stannis’s army.

With George RR Martin on writing duties and the conventional Game Of Thrones structure dispensed with in order to focus in on the events at King’s Landing, “Blackwater” struck home with the force of a ten thousand angry Baratheons. A full-scale Westerosi battle has been a long time coming, and it’s a relief to know that when it gives itself over to the full epic scope of Martin’s vision, Game Of Thrones delivers.

We’ve been on the edge of many a scrap of course, from Tyrion’s abortive fight alongside the hill tribes to Robb’s battlefield wanderings, but this was something else altogether. Things started slowly, the anticipation of Stannis’s arrival almost as gut-knotting as the main event itself. Tyrion’s restlessness, Davos’s wary appraisal of the King’s Landing defences and Cersei’s decision to procure poison from Pycelle, not to mention Bronn and the Hound’s ale-fuelled face-off, all helped quickly establish the stakes and the consequences should Stannis succeed.

The first devastating blow, dealt by Tyrion with the help of a cunning fire-ship, was nothing short of spectacular. Game Of Thrones is a show with a knack of knowing exactly the right moment to deploy its special effects, and not a penny was wasted on the explosive results of the Imp’s plan. As the gouts of green flame ripped through Stannis’s fleet, the confusion and horror of war were never more apparent.

And yet, Stannis kept on coming. Weight of numbers and force of will kept the fight for King’s Landing unpredictable right up to the last moment, neither side clearly having the upper hand. The action was handled in typical Game Of Thrones style, with heads and limbs flying off all over the place, but the slaughter never tipped over into gratuitous.

In fact, for all the splatter-drenched swordplay, some of the most gripping scenes of “Blackwater” occurred in Maegor’s Holdfast courtesy of Lena Headey’s desperate, drunken Cersei. The Queen Regent’s booze-fuelled ranting at Sansa about the realities of warfare was as frightening as anything happening on the battlefield, her leery advice that “tears aren’t a woman’s only weapon” somehow cold and emphatically genuine at the same time.

Cersei wasn’t the only character to reveal fresh new facets of their personality; Joffrey’s façade predictably collapsed in the face of real danger, while the Hound’s aversion to fire led to one of the most satisfying outbursts we’ve seen thus far (“f**k the king!”). On the other end of the scale, Stannis proved to be a formidable fighter, leading his men into battle with an almost reckless courage. Suddenly, the Lannister’s fear of the Baratheon pretender made perfect sense. Similarly, Tyrion demonstrated once and for all that size matters not, even if he did end the day with a messy slash across the face.

The ebb and flow of battle, the rallying of defeated troops, the last minute cavalry charge that saved the day for the Lannisters – this was stirring, cinematic television, the likes of which have rarely, if ever, been seen before. The fallout from “Blackwater” will not only shape the next season, but also act as a marker for what Game Of Thrones is capable of at its very best. Magnificent.

The fight stuff: While the Hound was as bloodily brutal as you might expect, the award for toughest nut at the Blackwater has to go to Stannis. Makes you wonder what Robert and his war-hammer were like on the battlefield…

Read all our previous Game Of Thrones Season Two reviews