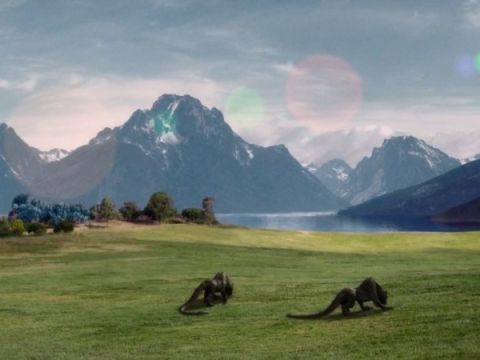 THE ONE WHERE Walter foils William Bell's plan to create a new universe by shooting Olivia in the head.

UNIVERSE Over here and over there (briefly) – orange credits.

VERDICT Jeez, those Fringe writers, they do like to tease us! They show us a trailer (then an opening shot) of a prehistoric world crawling with Primeval -style hybrids... then whisk it away. It was all just William Bell's simulation! Thus setting the tone early on, they pull the ol' rug from under us a few times during this episode. Jessica's being stalked by a mysterious stranger! But actually it's an Observer who's her prisoner. Astrid was shot! But actually she's fine. Olivia's been shot! But actually she's fine. Then it looks like she's going to confess to losing her new memories! But actually she reveals she's pregnant.

You have to admire Fringe for wanting to end the season with a few answers but in order to neatly tie off many of its hanging strands the script this week tries a little too hard to point out what's happened. When September is hit by Jessica's new type of weapon, Peter duly points out that "at least we know how you got shot!" When Walter guns down Olivia, Peter helpfully points out that this is what September meant when he said she has to die in all possible futures. I usually enjoy spotting the connections in Fringe , but Peter's exposition made it all so obvious somehow. At least there were no cheesy, "We can called her... Henrietta !" lines of dialogue when Olivia revealed she's pregnant.

Moreover, William Bell's motive feels hollow. I understand how a younger Walter might have become bitter and destructive when Peter died, but why exactly does Bell want to reboot everything today? "I am old and therefore I will kill everybody in the universe !"? Why would henchmen (including David Robert Jones and Jessica Holt) help him?

Nonetheless this is a gripping episode. Not just because of the rug-pulling; I've come to care so much about these characters that watching Walter knock a spike into Olivia's skull to dislodge a bullet is incredibly tense, even though we see gorier things than this on the show all the time. With some cute character moments (Astrid more worried about failing to protect Walter than about her own injuries) and a definitive end to Bell's villainous hybrid ark scheme, in many ways this would have been a superb conclusion to the whole series.

RELIGIOUS SYMBOLISM Bell makes the Biblical parallels as clear as, well, a bell: he refers to himself and Walter in terms of gods of creation, he also explicitly calls Peter and Olivia the new Adam and Eve. My previous speculation about the rainbow as a deliberate symbol from the Noah story takes on more credence when you consider Bell was escaping on a literal ark.

DID YOU SPOT The bullet to her forehead is the same kill shot that Walternate makes on Olivia in 2026 in "The Day We Died" back at the end of season three.

LMAO Walter always has time for a snack. He asks a passing nurse if her urine samples are lemon jello. ("Ah. In that case: no thank you. I'm more peckish than thirsty.")

OBSERVING THE OBSERVER Familiar Observer September is a key part of the plot. Presumably his warning at the end refers to the coming Observer invasion .

THAT'S HORRIBLE Jessica's dead body, stimulated by Nina's technology, stirs; I don't know what it is about eyes moving out of sequence with each other but it weirded me out. And then she starts calling for her mummy. Creepy.

SPECULATION The final season , just 13 episodes long, must deal with the struggle against the Observers as seen in "Letters Of Transit", including how William Bell and the Fringe team ended up in amber.

BEST LINE
William Bell: "The Bible tells us God created his universe in seven days. It's taken me considerably longer."

Fringe has been airing in the UK at 10pm on Wednesday nights on Sky 1 , then repeated on Sky2 on Thursday evenings. This was the last in the present season. The show will return in the US for 13 more episodes this autumn.