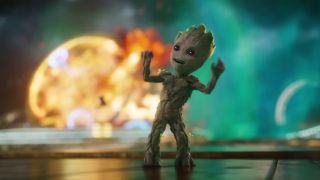 Guardians of the Galaxy 2 is just over the starry horizon, but a bunch of lucky so-and-sos have already seen it. Their reactions, which you can see below, range from amazing to, uhh, even more amazing. So far, so good then; take a looksee at how the critics have reacted to everything, from the tunes of Awesome Mix Vol. 2 to the sugary-sweet shenanigans of Baby Groot.

GUARDIANS OF THE GALAXY 2 kept a smile on my face from beginning to end. Funny, action packed, emotional, and tons of surprises. Thumbs up. pic.twitter.com/aIz7RedwinApril 18, 2017

Mantis and Drax steal the movie. The music on Awesome Mix 2 is great and has some deeper tracks than vol 1.April 18, 2017

I say without hyperbole: #GotGVol2 is MCU at its very best. Grand adventure with intimate stakes. Uses every damn color in the crayon box. 🌈April 18, 2017

Baby Groot is cuter than you can possibly imagine, Star-Lord reminds me why I liked Pratt, but YONDU 💙💙 is the real standout. #GotGVol2April 18, 2017

Going in with through-the-roof expectations, Guardians Vol. 2 still left me wishing it was never going to end. I seriously loved it. pic.twitter.com/kMvGQCeRiSApril 18, 2017

GUARDIANS OF THE GALAXY VOL. 2 is exciting, funny, gorgeous & a helluva tearjerker. For many, it will become their new favorite Marvel movie pic.twitter.com/Po4ZOSPs8QApril 18, 2017

GUARDIANS OF THE GALAXY VOL 2. is very fun. Takes the EMPIRE "split up your characters" strategy. Drax is a hoot. Baby Groot steals the showApril 18, 2017

Directed by James Gunn and starring Chris Pratt, Zoe Saldana, Dave Bautista, Vin Diesel, Bradley Cooper, and Kurt Russell, Guardians of the Galaxy 2 hits cinemas on April 28 in the UK and US theatres on May 5.