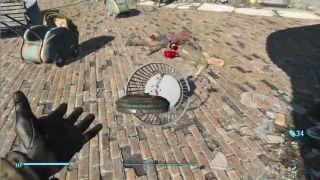 Leave your Fat Man and your Gauss rifle back at camp, the most powerful weapon in the Fallout 4 arsenal has been determined once and for all. Reddit user Quinchillon has painstakingly (literally, what with all the blowing up) researched the destructive capability of the humble waste receptacle, and they didn't even need the Contraptions DLC to do it.

Physical objects block splash damage from grenades and other explosives in Fallout 4, and most of them - including the feeble-looking wire trash can - are completely invulnerable to damage. "I was first trying to throw the grenade at the ground near the mines and then cover it all up with the bin, but the grenade wasn't very cooperative and kept going all over the place," Quinchillion wrote. "Then I realized it would be much easier to do it like this instead."

"You can actually use this trick in combat. Throw a nade in the bin and rotate it away from you and towards a charging ghoul. Poor guy's explosive shotgun. I might record that actually…"

Granted, radroaches had all of this figured out months ago, the tricky bastards.