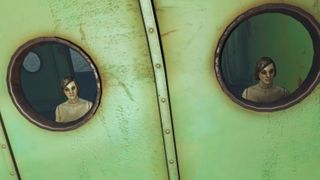 Fallout 4's Far Harbor DLC doesn't have quite as many secrets waiting under the waves as the main game, but it's still surprisingly well-populated down there. Especially by murderous lawn gnomes (apparently they love to stand eternal vigil over their victims, making them great screenshot fodder). Reddit user Lavonicus once again took on the task of mapping points of subaquatic interest for the good of all mankind, and here are some of the highlights that they found.

Oh, and these pictures are much less blurry than the ones from the base game because Lavonicus just used the PC version to turn off water effects this time. Convenient!

You can check imgur for the full gallery of around 100 images, and Lavonicus even included a map so you can head straight to the cool parts yourself. There's a smattering of loot down there, but if that's what you're interested in, your time would probably be better spent on land - this is all about the joy of finding weird junk that 99 percent of your fellow players will never see.