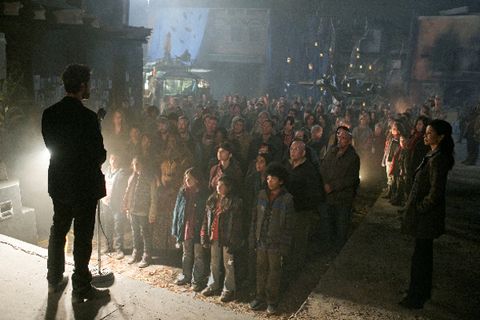 THE ONE WHERE: Charleston is under attack from mysterious enemy snipers. Pope struggles to save the life of Crazy Lee while Anne grows increasingly unsettled by her baby daughter…

THE VERDICT: An intentionally budget-conscious bottle episode, “Badlands” favours human drama over SF candy and is all the better for it. There are no Mega-Mechs, no Skitters, no Volm, no Overlords, but plenty of emotional resonance – a gift for a talented cast who rarely get to dig their teeth into scripts in this way.

It begins simply, strongly, throwing us into the middle of a siege situation, the outskirts of Charleston under fire from unseen sharpshooters. Crazy Lee’s fight for survival in the crucible of this crossfire only twists the tension further – and the spike embedded in her head is surprisingly gruesome stuff for Skies ( ER flashbacks for Noah Wyle?). The badlands themselves are strikingly realised, all rubble and burnt-out buildings and the grey ruins of civilisation, one of the more convincing post-apocalyptic locations the series has shown us. There’s a decent sense of atmosphere here, helped by director David Solomon’s decision to amplify the sound of the wind in certain scenes.

Elsewhere the episode is built on what feel like genuine human moments. Tom’s apology to Anne for his neglect feels real, and her guarded, half-doubting look when he restates his love for her is beautifully played by Moon Bloodgood. Weaver’s confession to his daughter that he has something worth dying for is another lovely beat. The emotional heart, of course, is Crazy Lee’s death scene, which manages to feel powerful and underplayed in equal measure.

And it’s fitting that an episode that sidelines the extra-terrestrial introduces us to a rival faction of survivors. Human civil war on an alien-occupied Earth could prove an intriguing story engine.

That final singalong errs on the side of icky, mind. What a well-timed attack - I had a chilling feeling we were heading towards a communal rendition of We Are The World...

STAR TURN: A word for young Maxim Knight, quietly credible as boy soldier Matt Mason. When he tells Crazy Lee “I’m not going to let you die in this hole, I promise” you can see definite shades of his dad’s calm, determined heroism.

TRIVIA: The order to kill Crazy Lee came from none other than executive producer Steven Spielberg, who was keen to expose Pope’s more vulnerable side.

TRIVIA 2: While the script specified “badlands” – outposts beyond the city walls – no such sets existed, and there was precious little budget to construct them. New sets were hastily improvised, built on the show’s parking lot.

BEST LINES:
Pope: “I can’t go to Disneyland. They won’t let me.”
Crazy Lee: “Why not?”
Pope: “I got into a little fist fight with Goofy last time I was there.”

Falling Skies is shown on TNT on Sundays in the US