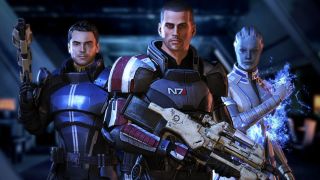 If the idea of Mass Effect Andromeda isn't scratching your relay-flavoured itch because of its lack of Commander Shepard, you might just be in luck. In an interview with Game Informer, executive vice president of EA, Patrick Soderlund has suggested that remasters of the Mass Effect trilogy might be in the works.

Soderlund had previously said that the company's focus should be on new projects but when asked about the idea of remasters and Mass Effect in particular, he admitted that things have changed. "What's changed is that there is proof in the market that people want it, maybe more than there was when we spoke. There were some that did it before, but I think there is even more clear evidence that this is something that people really want," he said.

"The honest answer is that we are absolutely actively looking at it. I can't announce anything today, but you can expect us most likely to follow our fellow partners in Activision and other companies that have done this successfully." Well, this sounds promising. They might not arrive before Andromeda but chances are we'll probably be seeing Shep again soon this generation.