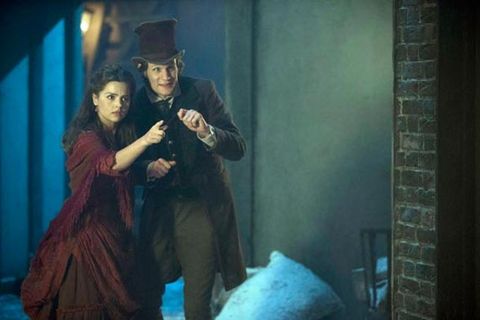 THE ONE WHERE: Exiled to Victorian England, a reluctant Time Lord returns to world-saving duty. There are sentient snowmen to confront, an old adversary to outfox and a new lady companion to woo with the trusty magic box routine. Meanwhile something very nasty indeed is taking form beneath the ice. And ice, we soon learn, remembers… Happy Christmas! Don’t have nightmares.

THE VERDICT: Doctor Who Christmas specials always feel as though they exist in a pocket dimension of the main show – somewhere brighter, broader, altogether baublier than the usual Saturday evening universe. It's a heightened, sugar-rush realm where the line between magic and sci-fi disappears in a woozy, brandy-soaked snog beneath the mistletoe. "The Snowmen" is no exception – but it’s also part of a grander tradition. With its wintry Victoriana, sinister governesses and dream-haunted children it evokes everything from The Box Of Delights to The Amazing Mr Blunden , locked in a classic lineage of English children’s fantasy where the uncanny infiltrates the nursery. It’s easy to see Clara as a junior Mary Poppins (she tells the Latimer kids she was born behind the clockface of Big Ben and went on to invent fish – do we necessarily have to assume she’s lying?). And there’s a distinct hint of Peter Pan as the Doctor asks her “Will you come away with me?” like some forlorn Lost Boy looking for his new Wendy. Director Saul Metzstein brings an impressively filmic sheen to Moffat’s snowbound fantasy and conjures some truly gorgeous storybook visuals: Clara’s ascent of the spiral staircase into the moonlit clouds is one of the most genuinely enchanted moments in Who history. Elsewhere, A-list guest villain Richard E Grant feels surprisingly underused, and while the piranha-mouthed Snowmen and the frozen governess are fine additions to the show’s monsterium the ultimate threat of the Great Intelligence never quite comes into sharp relief. These quibbles aside, this is Moffat on good form: the notion that the more you think about the Snowmen the more they appear is the kind of splendidly evil conceit that will worm its way into a generation’s psyche. The comedy, too, is terrific, with Sontaran manservant Strax just the right side of crowdpleasing (“Do not attempt to escape as you will be obliterated. May I take your coat?"). The Grinch brigade will doubtlessly hate the fact that the power of emotion saves the day again – old school Who reversed the polarity of the neutron flow; modern Who favours reversing the polarity of your heart – but the idea of a dying girl’s tears defeating the forces of darkness makes absolute sense in this seasonal fairytale context. You suspect Hans Christian Andersen would approve.

STAR TURN 1: Richard E Grant’s third – most canonical - brush with Doctor Who finds him bringing a disdainful chill and marvelous low-key creepiness to the role of Doctor Walter Simeon. All tombstone face and topper, it’s a persuasively understated turn by Grant, who smartly resists the urge to go for the jugular with this one. His quiet ultimatum “Release her to us – you have five minutes” may just be the most chilling thing here.

STAR TURN 2: Jenna-Louise Coleman’s debut as Clara (or at least her Victorian incarnation) matches the impact she made as Oswin in “Asylum Of The Daleks”. Clara’s clearly less of a motormouthed quip- merchant than Souffle Girl, but Coleman makes her equally winning – plucky, smart and riffing on a very promising chemistry with Matt Smith. She gives us two Claras for one, really, switching from cockerney sparra to posho governess like one of Henry Higgins’ more successful experiments.

DID YOU SPOT: Learning the name of the Great Intelligence, the Doctor declares that it “rings a bell.” The events of "The Abominable Snowmen" began with the Doctor needing to return a sacred bell to Det-sen Monastery…

NEW TITLES: The revamped title sequence has more punch than its predecessor, keeping the essence of a mad plunge through the vortex but also hurling the familiar police box through assorted cosmic maelstroms and fiery stellar phenomena. Great to see the Doctor’s face in there too, an iconic part of the ritual that’s been AWOL since the show’s return in 2005. The retooled theme’s an intriguing brew of old and new too, resurrecting the unearthly electronica of the classic series - just in time for the 50 th .

NEW TARDIS: Michael Pickwoad’s redesign of the TARDIS interior strips away the Wonka whimsy of the Eleventh Doctor’s first console room – goodbye Hot and Cold taps! Farewell ketchup dispenser! It’s a surprisingly frugal piece of design, swapping the warm, autumnal womb we're used to for a darker, more austere look that emphasises cool, functional SF tech over Heath-Robinson insanity. The design of the console itself nods to the iconography of the classic show while the Gallifreyan runes have been promoted from Post-It scribbles in the Eccleston TARDIS to a full-blown interior design theme. Is the Doctor re-embracing his roots? Or has he just unearthed an edition of Grand Designs from his long-lost homeworld?

HMM: So who exactly is Clara – and how is she displaced across the fourth dimension? The last time we saw a character in a similar time-scattered plight it was Scaroth of Jagaroth in 1979’s Douglas Adams caper “City Of Death” – but please don’t tell us there’s a cyclopean, spaghetti-headed monster lurking beneath Jenna-Louise Coleman’s face. That might just spoil everything. Maybe she’s a riff on Michael Moorcock’s notion of the Eternal Champion – the Eternal Companion?

HMM 2: Knock back an eggnog every time you hear the word “Doctor” followed by “Who”. It’s almost as though we were approaching the answer to the first question, the question hidden in plain sight, the greatest question of all…

BEST LINE:
Vastra: “Hello, I am a lizard woman from the dawn of time – and this is my wife.”